Daniel Middleton (DanTDM) net worth: Daniel Middleton is an English gamer and internet personality who has a net worth of $35 million. Daniel Middleton was born in Aldershot, England in November 1991. He is best known for his YouTube channel DanTDM which was formerly The Diamond Minecart. He covers many video games with Minecraft being the main focus. Middleton has amassed more than 10 billion views and 16 million subscribers on YouTube. It was estimated that he earned about $16.5 million alone in 2017 which made him the highest paid YouTube personality in the world for the year. Middleton started out with a Pokémon channel on YouTube before creating his main channel in 2012. In 2015 and 2016 he won Nickelodeon Kids' Choice Awards for UK Favourite Tipster. Middleton has set Guinness World Records for "Most views for a dedicated Minecraft video channel", "Most goals scored in a game of Rocket League for a team of 2", and "Most goals scored in a game of Rocket League (team of three). Middleton's graphic novel Trayaurus and the Enchanted Crystal was published in 2016.

Earnings: Daniel is consistently one of the highest-earning personalities on YouTube. In 2018, Daniel earned $18.5 million from his various endeavors which now includes a merchandise line featuring hats, hoodies, backpacks and much more. In 2019 he earned $12 million. 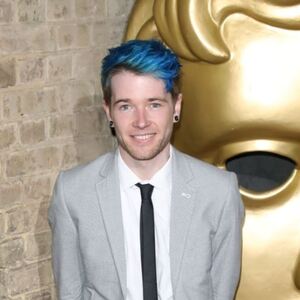