Damon Thomas is a music producer who worked with Babyface in songwriting and production for artists like Dru Hill and Pink and has a net worth of $1 million. Damon Thomas earned his net worth as a songwriter and music producer. In 1999 he teamed up with Harry Mason Jr and produced a single for singer Tyrese, "I Like Them Girls".

The duo has worked with a number of R&B performers, among them Lionel Richie, Omarion, J. Valentine, Joe, Donell Jones, Olivia, Mario, JoJo, Mario Vasquez, Nancy Wilson, Stacie Orrico, Chris Brown, Ruben Studdard, Ne-Yo, Fantasia, Katharine McPhee and more. Recently, the duo produced Monica's single "Sideline Ho". The Underdogs is an R&B/pop production duo composed of Harvey Mason, Jr. and Damon Thomas. In 2011, The Underdogs reunited to produce "Up 2 You" for Chris Brown's album "F.a.m.E. and the song "Living Proof" with Mary J. Blige for motion picture "The Help". He co-wrote the song "Can't Wait", which was performed by Avant. He is especially known for his Black Reel Award and for a Grammy Award Nominalization. He was married to Kim Kardashian from 2000 through 2004. In February of 2010, a former maid sued both Thomas and Kardashian for failure to pay for service rendered. In 2012 Damon Thomas filed for bankruptcy in California. 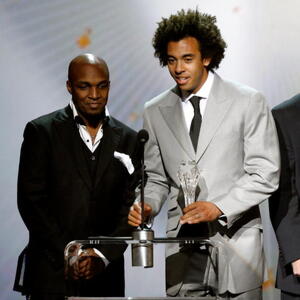