What Is Camille Cosby's Net Worth?

Camille Cosby is an American manager, producer, author, and philanthropist who has a net worth of $20 million. Camille is the wife of actor and comedian Bill Cosby, and she was the inspiration for Clair Huxtable on "The Cosby Show," which aired on NBC from 1984 to 1992. She was Bill's longtime business manager, and she is the president of COC Productions and C&J Productions.

Camille directed the 1987 video documentary "Bill Cosby: 49," and she has produced several projects, including the television series "Obkb" (2010–2012). She published the book "Television's Imageable Influences: The Self-Perception of Young African-Americans" in 1994, followed by "The Other Side of Color: African American Art in the Collection of Camille O. and William H. Cosby Jr." in 2001.

Camille Cosby was born Camille Olivia Hanks on March 20, 1944, in Washington D.C. Her mother, Catherine, worked at a nursery, and her father, Guy, worked at Walter Reed General Hospital as a chemist. Camille grew up with three younger siblings in Norbeck, Maryland, and she attended the Catholic schools St. Cyprian's and St. Cecilia's Academy. After graduating from high school, she enrolled at the University of Maryland to study psychology. Camille met her future husband, Bill Cosby, when she was in college, and she dropped out at age 19 to marry him. She later went back to college, earning a master's degree from the University of Massachusetts Amherst in 1990, and she received her Ph.D. two years later. In 1987, Cosby received an honorary Doctor of Humane Letters from Washington, D.C.'s Howard University.

Cosby has been described as a "shrewd businesswoman," and during a 1988 "Ebony" interview, Bill stated, "People would rather deal with me than with Camille. She's rough to deal with when it comes to my business." Camille appeared in a 1986 episode of "The Cosby Show," and she had an uncredited role in the 1999 TV movie "Having Our Say: The Delany Sisters' First 100 Years," which she also executive produced; she had previously produced the Broadway version of the film. She has served as an executive producer on "No Dreams Deferred" (1994), "Bill Cosby: Mr. Sapolsky, with Love" (1996), "Ennis' Gift" (2000), "Sylvia's Path" (2002), and "Fat Albert" (2004) as well as Bill's album "Oh, Baby" (1991). Camille wrote the foreword for the books "Our Family Table: Recipes and Food Memories from African-american Life Models" (Thelma Williams, 1993), "Dear Success Seeker: Wisdom from Outstanding Women" (Michele R. Wright, 2009), and "The Man from Essence: Creating a Magazine for Black Women" (Edward Lewis, 2014), and she edited 2004's "A Wealth of Wisdom: Legendary African American Elders Speak" with Renee Poussaint. In 2001, she co-founded the National Visionary Leadership Project, which was dedicated to developing "the next generation of leaders by recording, preserving, and sharing the stories of extraordinary African American elders." 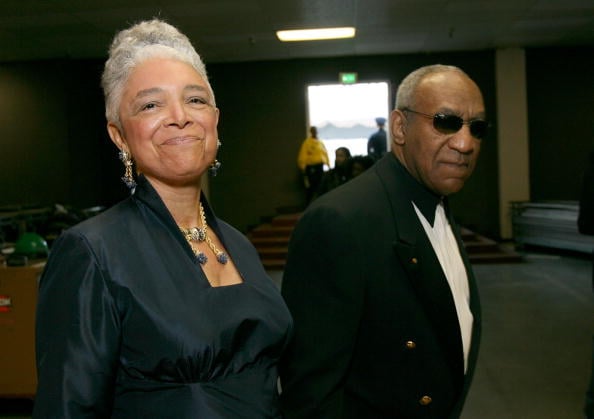 Camille married Bill Cosby on January 25, 1964, and they welcomed four daughters, Erika (born in 1965), Erin (born in 1966), Ensa (born in 1973), and Evin (born in 1976), and a son, Ennis (born in 1969). In 1997, Ennis was shot to death in Los Angeles while changing a flat tire; he was just 27 years old. After the tragic murder of her son, Camille wrote a column entitled "America Taught My Son's Killer to Hate Blacks" for "USA Today." Sadly, the Cosbys lost another child in 2018 when Ensa passed away from renal disease at age 44. Camille is related to actor Tom Hanks, and they are both related to Abraham Lincoln, whose mother was named Nancy Hanks.

After Bill was accused of drugging and sexually assaulting women, dating back to the mid-'60s, Camille stated in 2014, "The man I met, and fell in love with, and whom I continue to love, is the man you all knew through his work. He is a kind man, a generous man, a funny man, and a wonderful husband, father and friend." She was later subpoenaed to give a deposition when seven of Bill's accusers filed a defamation lawsuit against him, and she invoked spousal privilege on several of the questions. When Bill was convicted of sexual assault in May 2018, Camille released a statement on social media that read, in part, "An innocent person has been found guilty based on an unthinking, unquestioning, unconstitutional frenzy propagated by the media and allowed to play out in a supposed court of law. This is mob justice, not real justice. This tragedy must be undone not just for Bill Cosby, but for the country." In June 2021, the Supreme Court of Pennsylvania overturned Bill's conviction due to a "violation of Cosby's due process rights." Approximately 60 women have accused Bill of rape, sexual assault, sexual battery, or sexual misconduct.

Camille is passionate about charity work and is a member of The United Negro College Fund, Operation PUSH, the National Council of Negro Women, the Southern Christian Leadership Conference, and the National Rainbow Coalition. In 1992, she was honored with the National Coalition of 100 Black Women's Candace Award, and in 2005, she donated $2 million to the Baltimore Black Catholic high school St. Frances Academy, which resulted in the school endowing more than a dozen scholarships in her name. The Cosbys donated $100,000 to Central State University in the early 1980s and $325,000 in 1987; two years later, the school held the "Camille and Bill Cosby Cleveland Football Classic" to honor them for their generosity. The couple has also donated money to Fisk University ($1.3 million), Meharry Medical College ($800,000), and Bethune-Cookman University ($750,000). When they donated $20 million to Spelman College in 1987, "The New York Times" reported that it was the largest donation ever given to a historically black college. In 1996, Spelman opened the Camille Olivia Hanks Cosby Academic Center in Cosby's honor.