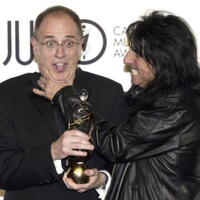 Bob Ezrin net worth and salary: Bob Ezrin is a Canadian music producer and keyboardist who has a net worth of $40 million dollars. Bob Ezrin was born in Toronto, Ontario, Canada in March 1949. He is best known for working with popular artists such as Lou Reed, Kiss, Alice Cooper, Deep Purple, Pink Floyd, Phish, and Peter Gabriel. Alice Cooper has described Ezrin as being the "George Martin" of his band. He produced the Kiss album "Destroyer" which was the band's first platinum record. Ezrin's career has spanned four decades and he has more recently worked with artists such as Thirty Seconds to Mars and Deftones. In 1993 he co-founded the interactive media company 7th Level and has also been responsible for projects including Music Rising and Young Artist for Haiti. Ezrin was inducted into the Canadian Music Hall of Fame in 2004 and has also won a Juno Award. In 2009 he co-founded the Nimbus School of Recording Arts.