Just Blaze Net Worth: Just Blaze is an American hip-hop record producer who has a net worth of $20 million. Justin Smith (aka Just Blaze) was born January 8, 1978 in Paterson, New Jersey. He is best known as the CEO of Fort Knocks Entertainment. Just Blaze worked with Roc-a-Fella Records in the early 2000s, producing hits like Cam'ron's Oh Boy, Jay-Z's Girls, Girls, Girls and Beanie Sigel and Freeway's Rock the Mic.

He worked with Roc-a-Fella's other in-house producer, Kanye West, on the label's many albums released during this same period. Just Blaze developed a trademark knack for using old-school soul samples in unique ways for his hooks. Besides the Roc-a-Fella stable of rappers, Just Blaze also produced tracks for big-name east coast rappers such as Busta Rhymes, Jadakiss, DMX and Fabolous. By the turn of the century, he'd become one of the rap industry's leading producers, along with Timbaland, the Neptunes and Swizz Beatz. During his career Justin Smith (aka Just Blaze) has also produced records for Eminem, Kanye West, Rick Ross, Drake and many other Grammy-winning artists, becoming one of the rap world's most sought-after producers. When not producing, Just Blaze organizes DJ contests, scouts for new talent and performs DJ sets. 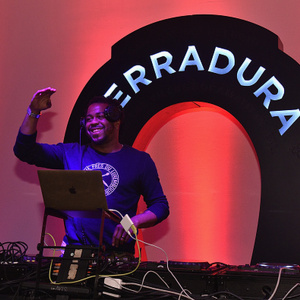