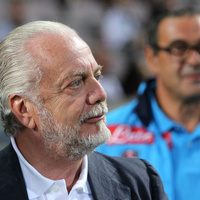 Aurelio De Laurentiis Net Worth: Aurelio De Laurentiis is an Italian film producer who has a net worth of $50 million dollars. Aurelio De Laurentiis was born May 24, 1949 in Rome, Italy. He is a prominent Italian film producer through his company, Filmauro and the current chairman of his native Italian football club Napoli. In 1995 he was a member of the jury at the 19th Moscow International Film Festival. In his early years, Aurelio studied to be a cinematographer and produced his first film by the age of 20. In the 1950s, he joined fellow filmmaker Carlo Ponti to establish the production company Ponti-De Laurentiis. The company produced the venerated, Oscar-winning Federico Fellini films La Strada (1954) and Nights of Cabiria (1957). He created his own sprawling movie studio, Dinocitta, in the 1960s, but moved to the United States in the early '70s after the failure of Dinocitta. In 2001, he received the Irving G. Thalberg Award at the Oscars for having "the most consistent high level of production achievement by an individual producer." Aurelio De Laurentiis is the nephew of film producer Dino De Laurentiis and a first-cousin once removed of chef Giada De Laurentiis.