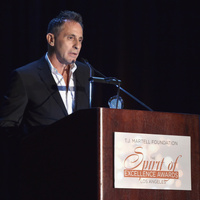 Arthur Fogel net worth: Arthur Fogel is a Canadian music presenter who has a net worth of $100 million dollars. Arthur Fogel was born in Canada, and was initially focused on a career in music. He is an accomplished drummer, which helped to fuel his career as a promoter. In the late 90s, he began working for Live Nation, serving as the President of Music Touring, and then as the Head of Global Touring. He then became the President of the Next Adventure of Live Nation. In 2005, he was appointed Chairman of Global Music and Chief Executive Officer of Global Touring at Live Nation Entertainment, Inc. With Live Nation, he has produced multiple successful tours, including Madonna's "Confessions", "Drowned", and "MDNA" Tours; Lady Gaga's "Born This Way" and "The Monster Ball" Tours; U2's "360" Tour; and Diana Ross' "Return to Love" Tour. He is widely considered to be the most powerful live music promoters in the music business.