How much is Anthony Zuiker Worth?

Anthony Zuiker is an American television creator and executive producer who has a net worth of $150 million. Anthony Zuiker has earned his net worth by creating the American television crime series CSI: Crime Scene Investigation. Zuiker is the producer for all three editions of the CSI franchise, they include CSI: Crime Scene Investigation, CSI: Miami and CSI: NY. In addition to producing he also assisted in the writing of the movie Terminator Salvation. He was born on August 17, 1968 in Blue Island, Illinois, his family moved to Las Vegas, Nevada when Anthony was only six months old. His mother Diana took a job as a blackjack dealer and his father was a Maitre d'. He attended Arizona State University in Tempe, Arizona for three years, after that he transferred to the University of La Verne in La Verne, California and graduated there. He was involved in competitive forensics and he even advanced all the way to the semifinals at the national speech tournament. He received the Big Brother Award Austria 2007, on October 25, 2007, in the category of communication and marketing. He has written and released two books the first Level26: Dark Origins was released on September 8, 2009; this book is an associated web-based motion picture and interactive elements which he terms a "digi-novel". The second book Level 26: Dark Prophecy was released on October 14, 2010; the book was also released as an iPad application. This was designed and developed by Hooray, and a third level 26 book is planned to be released in 2011. He is a graduate of Chaparral High School located in Nevada in 1986; the school has a new theater that is named after him: the Anthony E. Zuiker Theater.

Anthony Zuiker's Divorce
Anthony Zuiker and his former wife Jennifer were midst of a very heated divorce from 2011 until 2014. Jennifer revealed in court documents that Anthony earns $25,000 per episode of CSI that airs. Keep in mind that there are three different CSIs on TV that air 24 episodes per season, so Anthony earns $25,000 multiplied by three, multiplied by 24 = $1.8 million per year. And that doesn't count the vastly more lucrative syndication profits Zuicker is entitled to every year. It was also revealed in court documents that Zuiker has earned close to $75 million off CSI since 2008 alone and his annual income is $20-30 million.

In September 2014, the divorce was finalized. Jennifer Zuiker was awarded half of all profits Anthony earns from the three CSI shows he created while they were married. She will not receive any profits from shows he creates from this point on. Jennifer will not receive any spousal support, despite requesting $170,000 a month to support her standard of living, because a judge determined that the CSI profits should be more than enough. Anthony will however pay $10,000 a month in spousal support for their three children. 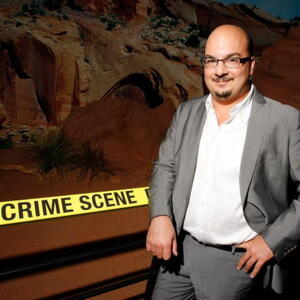