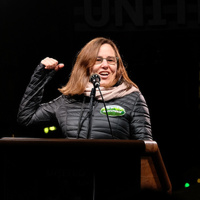 Annie Leonard is an American businesswoman, activist and filmmaker who has a net worth of $2.8 million. Annie Leonard has earned her net worth as an American proponent of sustainability and critic of excessive consumerism. She is also well-known for her controversial animated film about the life-cycle of material goods The Story of Stuff. Annie was born in 1964 in Seattle, Washington, she graduated from Lakeside School. She also has an undergraduate degree from Barnard College as well as a graduate degree in city and regional planning from Cornell University. She and her daughter Dewi who was born in 2009 live in the Bay Area. After The Story of Stuff, she created several other documentaries about stuff, such as; The Story of Cap and Trade in 2009 which is about emissions trading, as well as, in 2010, The Story of Bottled Water, The Story of Cosmetics, and The Story of Electronics. On March 11, 2011 she released a brand-new documentary "The Story of Citizens United v. FEC". Leonard is also co-creator and coordinator of GAIA (Global Alliance for Incinerator Alternatives) and serves on the boards of International Forum on Globalization (IFG) and the Environmental Health Fund. Some of her former positions were with Health Care Without Harm, Essential Information and Greenpeace International and was coordinator of the Funders Workgroup for Sustainable Production and Consumption. Leonard testified in front of the US Congress in 1992 on the topic of international waste trafficking.