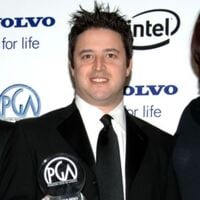 Andy Lassner Net Worth and salary: Andy Lassner is a Columbian-American TV producer who has a net worth of $12 million. Born in Bogota, Colombia, in late 1966, Andy Lassner is the executive producer of the hit daytime talk show "The Ellen Show" starring Ellen DeGeneres. Lassner is frequently seen on the show, usually involved in one of Ellen's famous pranks. Usually, the two attempt to out-do each other on set by scaring one another in front of the cameras. He began working on "The Ellen Show" in 2003 after previous stints as a producer on the talk show "The Rosie O'Donnell Show" beginning in 1996. In 2014, he also produced "Sophia Grace & Rosie's Royal Adventure", a film where two young girls who were popular guests on Ellen's show are sent to a faraway land to work on the new queen's coronation. Lassner worked as Ellen's executive consultant during The 86th Academy Awards, which she hosted for the second time in March 2014. His other TV credits as executive producer include "Ellen's Somewhat Special Special", "Ellen's Bigger, Longer & Wider Show", "Ellen's Even Bigger Really Big Show", "The Test", and "Kevin Nealon's Laugh Lessons". Lassner is married with children, and is an avid fan of the NHL's Los Angeles Kings.