Amy Sherman-Palladino net worth: Amy Sherman-Palladino is an American screenwriter, director who has a net worth of $40 million dollars. Born in 1966, Amy Sherman-Palladino is best known as the creator and executive producer of the television series Gilmore Girls. She is also well-known for her trademark rapid-fire dialogue, which is often peppered with pop culture references, and her preferred master shot filming style (shooting an entire scene from an angle that keeps all of the actors in view of the camera). The framing of the scenes in this manner is similar to that of a stage setting, making for long takes with no interruption. Palladino is known for her musical taste and is very particular about her music selections and the utilization of music in her work. In an interview with OutSmart magazine, she cites her disdain for the music on most television shows. Her shows also tend to take place in small, colorful New England-type towns. Her other television credits are Roseanne (1990-1994), The Return of Jezebel James (2008), Bunheads (2012-2013). In 2017 Amy created the critically-acclaimed Amazon series The Marvelous Mrs. Maisel which has won a number of Emmys and various other awards. She is married to Family Guy writer and producer Daniel Palladino 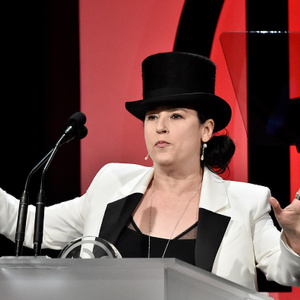