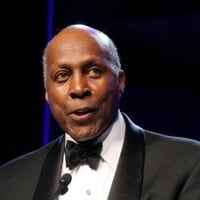 Vernon Jordan net worth: Vernon Jordan is an American lawyer and civil rights activist who has a net worth of $12 million dollars. Born in Georgia, Vernon Jordan excelled in school, and went on to graduate from DePauw University in 1957. He then went on to earn his law degree from the Howard University School of Law. He returned to Georgia after graduating in order to work for Donald L. Hollowell, a lawyer devoted to civil rights. As a lawyer at Mr. Hollowell's firm, he was instrumental in winning a lawsuit against the University of Georgia for racial discrimination in their admission policies. From there, he went on to work as a field director for the NAACP, worked for the Voter Education Project, served as Executive Director of the United Negro College Fund, and was the President of the National Urban League for ten years. In 1980, he was shot while standing outside a hotel, but survived. He served as an advisor to Bill Clinton while he was a governor and then President. He continues to work as a managing director and counselor for multiple companies and politicians.