Rob Pelinka net worth and salary: Rob Pelinka is an American team executive, lawyer, and sports agent who has a net worth of $25 million. Rob Pelinka was born in Chicago, Illinois in December 1969. He is the general manager of the National Basketball Association team the Los Angeles Lakers. Pelinka earned his J.D. from the University of Michigan Law School and his B.B.A. from the Ross School of Business. He represented Kobe Bryant as his agent and was the president and CEO of The Landmark Sports Agency, LLC. Pelinka has also represented other players including Derrick Williams, Dion Waiters, Andre Drummond, Kevin Durant, and Carlos Boozer. Rob Pelinka played basketball at Lake Forest High School where he was on the Fab Five teams and he was named 1993 NCAA Male Walter Byers Scholar Athlete of the Year. At Michigan he also reached three NCAA Men's Division I Basketball Championship games and won the 1989 NCAA Tournament Championship. 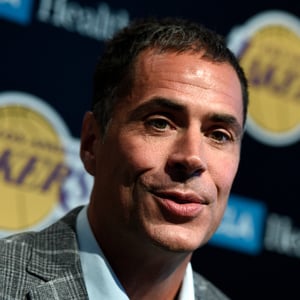