Rob Manfred Net Worth and Salary: Rob Manfred is an American lawyer and business executive who has a net worth of $30 million. Rob is best known for serving as the 10th Commissioner of Major League Baseball. He previously served as the COO of MLB. He succeeded Bud Selig on January 25, 2015.

Rob Manfred was born in Rome, New York on September 28, 1958. Rob graduated from Cornell and Harvard Law School and served as a clerk for Judge Joseph L. Tauro in the Unit States District Court for the District of Massachusetts. Manfred became a partner at Morgan, Lewis, & Bocklus and focused on employment and labor law. He started working with Major League Baseball in 1987 during collective bargaining. Manfred was outside counsel for the owners during the 1994-94 MLB strike. He joined Major League baseball full time in 1998 and became the Executive Vice President of Economics and League Affairs. Manfred was promoted by Bud Selig to chief operating officer at the end of the 2013 season. Manfred was voted unanimously to become the new commissioner of baseball on August 14, 2014. He officially took the position in January 2015.

Rob is married and has four children. He is a board member at the Catholic School of Holy Child in Rye, New York. 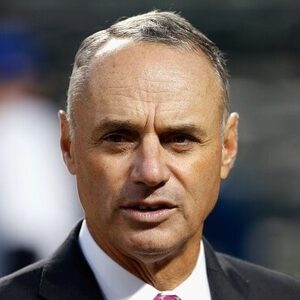