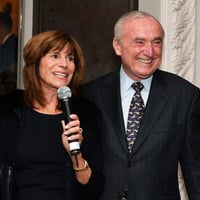 Rikki Klieman net worth: Rikki Klieman is an American criminal defense lawyer and television personality who has a net worth of $1 million. Rikki Klieman was born in Chicago, Illinois in 1948. She is known for being a television personality for TruTV. Klieman taught at Columbia Law School and is an author. Her husband William Bratton is the former chief of the Los Angeles Police Department as well as the former Police Commissioner of the New York Police Department. She graduated from Boston University School of Law and externed for U.S. District Court judge Walter Jay Skinner. Rikki Klieman worked for Friedman & Atherton in Boston before starting her own practice. She was named one of the five best female attorneys in the U.S. By Time magazine in 1983. As an actress she starred as Kathy Berson on the TV series Las Vegas from 2005 to 2008. She has also been a legal analyst and commentator for CBS.