Michael Cohen net worth and salary: Michael Cohen is an American lawyer who has a net worth of -$1 million. He was raised on Long Island, New York and graduated from American University. He is best known for being Donald Trump's former personal attorney. He was also an attorney for The Trump Organization for many years. He was previously a partner at the Phillips Nizer law firm. When he was a lawyer the Trump organization, Michael Cohen was paid a salary of $1 million per year. He joined the Trump Organization in 2006 and served as an Executive Vice-President as well as a co-president of Trump Entertainment. Cohen was involved in Trump's successful 2016 presidential campaign and was a member of the board of the Eric Trump Foundation. In February of 2018 it was revealed that Mr. Cohen paid an adult entertainer named Stormy Daniels $130,000 to keep her quiet about an affair she had with Donald back in 2006. Cohen also facilitated payments to a former Playboy model named Karen McDougal who also had an affair with Trump. In April 2018, Cohen's office and home were raided by the FBI. He was fired from the Trump Organization in May 2018. In August 2018 he pleaded guilty to a number of charges including tax evasion, bank fraud and campaign finance fraud. In December 2018 he was sentenced to serve three years in Federal prison.

Taxi Medallions: At one point, Cohen's paper net worth topped $100 million thanks to his ownership stake in more than 200 New York City taxis medallions. Before the advent of Uber and Lyft, a single taxi medallion could easily sell for more than $1 million. Today a taxi medallion would be lucky to sell for $100,000. At the peak of their value, before Uber existed, Cohen's share of the medallion collection was worth at least $100 million. Cohen reportedly sold his stake in at least one of his taxi companies to Ukrainian businessman Simon Garber. In 2012, Garber filed a lawsuit claiming Cohen had failed to pay a number of insurance settlements resulting from accidents involving their taxis. Arbitration documents from this case showed that Cohen had been making roughly $1 million per year from the taxi medallions they owned together. For some time, Cohen co-owned a large number of taxi medallions with a Russian named Evgeny Freidman. At his peak, Evgeny owned more taxi medallions than any other individual in New York City. Before Uber, Evgeny was considered a taxi billionaire on paper due to the sheer number of medallions he owned. In 2018 the majority of Freidman's medallions were auctioned off to satisfy outstanding debts. The auction raised approximately $24 million

Other ventures and Financial Problems: In 2003, Cohen invested $1.5 million to own a 30% stake in a Florida riverboat casino. That casino went bust after just a few months and set off more than 25 lawsuits from creditors. Cohen was not personally a defendant in any of those lawsuits. In 2006 he reportedly invested in in a Ukrainian ethanol business.

In 2015, Cohen reportedly purchased a $58 million apartment building in New York City's Upper East Side. His family members also reportedly own 12 apartment units in Trump buildings around the country. Michael and his wife own a $9 million penthouse in Trump Park Avenue.

When Cohen became a subject of federal investigation into his business dealings, he reportedly complained to an associate that his legal bills were "bankrupting him". His legal bills reportedly top more than $100,000 per month. He reportedly owes at least $1.4 million to the IRS. When he paid Stormy Daniels and Karen McDougal back in 2016, he used money obtained after receiving a $500,000 home equity loan. In the 2016 loan application, Cohen and his wife claimed to have a net worth of $40 million. 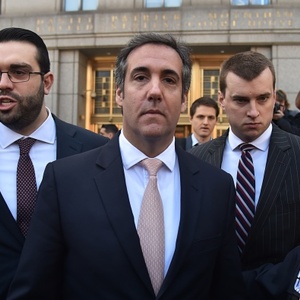