Marine Le Pen net worth: Marine Le Pen is a French politician and lawyer who has a net worth of $850,000. She is best known for being the President of the National Rally political party in France.

Marine Le Pen was born in Neuilly-sur-Seine, France in August 1968. She is a member of the National Rally party. Marine Le Pen is the youngest daughter of controversial politician Jean-Marie Le Pen. Marine is the aunt of Marion Marechal. She was in a relationship with Louis Aliot from 2009 to 2019. She served as a Member of the European Parliament from July 2009 to June 2017 as well from July 2004 to July 2009. Marine Le Pen was the Chair of Europe of Nations and Freedom group in the European Parliament from June 2015 to June 2017. She became the President of the National Rally in January 2011 and a Member of the National Assembly for Pas-de-Calais's 11th constituency in June 2017.

Assets and Wealth: In 2017, as part of her Presidential bid, Marine revealed her net worth was $755,000. Roughly half of her net worth was attributed to a 12.5% stake in the Le Pen family estate in Saint Cloud. She also owns other real estate interests totaling around $700,000 in value. At the time she did not own a car, life insurance or a savings account. Her checking at the time held the same as roughly $20,000. 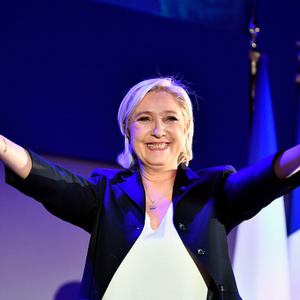