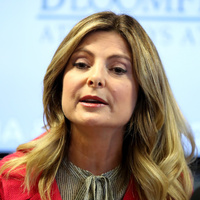 Lisa Bloom net worth and salary: Lisa Bloom is an American civil rights attorney who has a net worth of $5 million. Lisa Bloom was born in Philadelphia, Pennsylvania in September 1961. She is the only child of civil rights attorney Gloria Allred. Gloria and Lisa's father Peyton Huddleston Bray, Jr were together very briefly. Gloria and Peyton met, married and divorced all while in college. Lisa graduated from the University of California, Los Angeles and earned her JD from Yale University. After graduating she went to work for her mother's firm Allred, Maroko & Goldberg. Lisa founded her own firm, the Bloom Firm in 2001. Today the firm employs a dozen lawyers and has earned headlines for representing celebrity clients such as Kathy Griffin and Mishcha Barton. From 2006 to 2009 Lisa anchored the television series Lisa Bloom: Open Court, on truTV. She has authored the books Think: Straight Talk for Women to Stay Smart in a Dumbed-Down World, and Swagger: 10 Urgent Rules for Raising Boys in an Era of Failing Schools, Mass Joblessness, and Thug Culture.

Harvey Weinstein Representation: In September 2019 Lisa received overwhelming criticism and calls for her disbarment after her interactions with disgraced film producer Harvey Weinstein came to light. In the fall of 2016, Bloom reached out to Weinstein offering her services at a rate of $895 per hour. In a letter she wrote to Weinstein, Bloom outlined a detailed plan to falsely paint actress Rose McGowan as an unglued pathological liar. Lisa suggested Harvey hire her to plant false stories about Rose which would damage her reputation when people Googled her name. She offered to do the opposite for Harvey, to plant positive stories and manipulate Google to highlight those when someone Google his name. Perhaps worst of all, Lisa used her history in defending abused women as a reason she should be hired, stating that they (abused women) "start out as impressive, bold women, but the more one presses for evidence, the weaknesses and lies are revealed."

Real Estate: In 2016 Lisa and her husband Braden Pollack paid $2.3 million for a home in Los Feliz, Los Angeles. The home was the site of a brutal murder back in the late 1950s. Lisa and Braden attempted to sell the home in 2019 – after an extensive remodel – for $3.5 million. They ultimately accepted $2.5 million which likely represents a loss after their renovation costs.