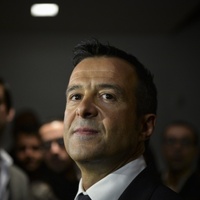 Jorge Mendes net worth and salary: Jorge Mendes is a Portuguese soccer agent who has a net worth of $100 million. As of this writing, Jorge has negotiated more than $1.2 billion in contracts for his clients. In a typical year he brings $100 million in commission back to the company he leads, Gestifute.

Jorge Mendes was born in Lisbon, Portugal in January 1966. He is the head of the Gestifute company which was founded in 1996 and he is registered with the Portuguese Football Federation. His clients have included Cristiano Ronaldo, Jose Mourinho, David de Gea, Diego Costa, Joao Felix, James Rodriguez, and more. Mendes has been called a super agent. He named himself the Best Agent of the Year from 2010 to 2015 at the Globe Soccer Awards. He started out as a soccer played and then ran a video rental store and worked as a DJ. He signed his first agent deal in 1996 for Nuno. Jorge Mendes became an agent for the Wolverhampton Wanderers and later worked with Swansea City. Mendes oversaw the transfer of Ronaldo from Sporting CP to Manchester City in 2003 for 12.24 million pounds.