Jerry Falwell Jr. net worth: Jerry Falwell Jr. is an American lawyer, real estate developer and former and university administrator who has a net worth of $100 million. He is the son of Jerry Falwell and became the president of Liberty University when his father passed away in 2007. On August 7, 2020 Jerry Jr. announced he was taking an indefinite leave from his role as president and chancellor of the university after a photo of him with his pants down was posted on instagram. He stepped down for good on August 24, 2020 in the wake of a sexual scandal involving Jerry allegedly being cuckolded by his wife and a Miami hotel pool boy several times a year, according to a detailed expose from Reuters.

Salary: Jerry Falwell Jr. had been earning $1.25 million per year in salary from the school. According to a clause in his employment contract, Falwell will likely be paid around $10 million as a buyout after stepping down. His contract calls for him to earn his salary for two years PLUS $8 million if he ever leaves.

Under the Falwell family's leadership, Liberty University grew from a tiny relatively-unknown Baptist school to a powerhouse with more than 95,000 undergraduate students.

Some have described the University as essentially not much more than a real estate hedge fund. In 2007, the year Jerry took over, the school listed $260 million in assets. Today the university controls more than $3 billion. Critics have complained that university-funded construction projects and real estate acquisitions have been done solely to enrich the Falwell family and their friends. According to a 2019 politico article, "the line between where the Falwell family's wealth begins and Liberty's finances end is blurry." The article listed several alleged examples where the university made financial loans or investments to Falwell family members or friends, investments which were arguably not in the school's financial interests. For example, Liberty reportedly gave a friend of Jerry's name Robert Moon a loan of $750,000 to launch a construction company called Construction Management Associates Inc., then proceeded to award that company $130 million in contracts. Falwell claimed to have not personally benefited from the company's dealings with the university.

Leave of Absence and Resignation: On August 7, 2020 Jerry announced he was taking an indefinite leave of absence from Liberty University. His statement gave no reason for the change but the announcement came just days after Jerry posted a photo of himself to instagram with a his arm around a woman and pants zipped down. Ironically, the photo was a direct violation of his school's code of conduct.

On August 24, 2020 Jerry resigned from Liberty University in the wake of a Reuters report that detailed a years-long sexual relationship his wife had with a pool boy from a Miami hotel. Falwell reportedly "enjoyed watching from the corner of the room" multiple times a year. The pool boy, Giancarlo Granda, was also a business partner of the Falwell. At one point Jerry offered him a share in a Miami youth hostel that they funded for their son Jerry Falwell III, aka "Trey". The Falwell's share of the investment was reportedly $4.7 million. 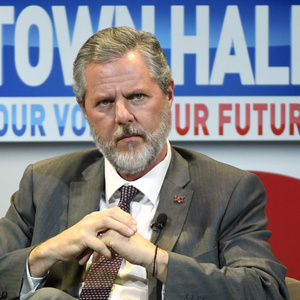