Janet Napolitano Net Worth: Janet Napolitano is an American politician, lawyer, and university administrator who has a net worth of $2 million. Janet Napolitano was born in New York City, New York in November 1957. Janet was voted most likely to succeed in high school. She graduated from Santa Clara University as valedictorian.

Napolitano received her Juris Doctor from the University of Virginia Law School. She became a law clerk for the United States Court of Appeals for the Ninth Circuit and then joined Judge Mary M. Schroeder's firm Lewis and Roca. Napolitano served as the 23rd Attorney General of Arizona from 1999 to 2003. She became the 21st Governor of Arizona in 2003 and served until 2009. She became the 3rd United States Secretary of Homeland Security in 2009 and served until 2013. Napolitano was the first woman to serve as Attorney General in Arizona. She was named by The New York Times in 2008 to be among the most likely women to become the first female President of the United States. She was also named by Forbes as the 9th most powerful woman in 2012. She resigned in 2013 as Secretary of Homeland Security to become the first female President of the University of California system. It is rumored that she may be a candidate for President in the 2016 election. 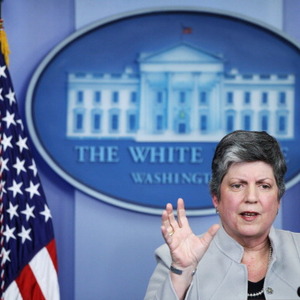