How much is James Comey Worth?

James Comey net worth: James Comey is an American lawyer who has a net worth of $14 million. James Comey was born in Yonkers, New York in December 1960. From January 2002 to December 2003 he served as United States Attorney for the Southern District of New York. Comey served as the 31st United States Deputy Attorney General from December 2003 to August 2005. From September 2013 to May 2017 he was the 7th Director of the Federal Bureau of Investigation. He was a republican before 2016 and then became an independent. In 2005 he became general counsel and senior vice president of Lockheed Martin. James Comey became general counsel at Bridgewater Associates in 2010 and in 2013 he became a Senior Research Scholar and Hertog Fellow on National Security Law for Columbia Law School. Comey oversaw the Hillary Clinton email controversy but was dismissed by President Donald Trump. He earned his BS from the College of William and Mary and his JD from the University of Chicago. When he was director of the FBI, James Comey's salary was $185,000. The vast majority of his net worth comes from his time at Bridgewater. In his final year of work at Bridewater alone, his salary was $6 million. He also earned a $3 million profit participation payout the year after he left. 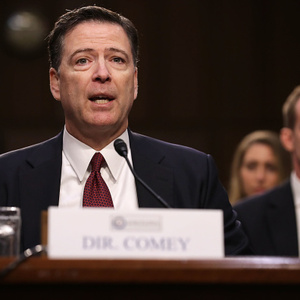