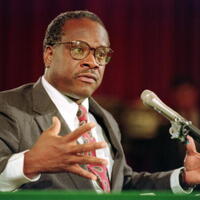 What is Clarence Thomas' net worth and salary?

In 2007 Clarence received a $1.5 million advance for what became his memoir, "My Grandfather's Son," which would go on to be a best seller.

Clarence Thomas was born in Pin Point, Georgia in June 1948. He briefly attended Conception Seminary College, reportedly leaving in the aftermath of Martin Luther King, Jr's assassination. Thomas later explained that he decided to leave after overhearing a fellow student remark "Good. I hope the son of a bitch is dead.", just one day after the murder. This experience caused Clarence to realize that the Catholic church wasn't doing enough to combat racism among its ranks of future priests.

During college, Thomas was prime age for being drafted into the Army to serve in Vietnam. He was able to put the draft off through a series of deferments but upon graduating he was 1-A, a designation for men who were extremely likely to be drafted. He was called in for a medical exam, which he failed due to curvature of the spine. The medical failure made him ineligible to be drafted.

Next, Clarence enrolled in Yale Law School where he graduated middle of his class in 1974 with his Juris Doctor degree.

Clarence moved to Missouri to practice law after graduating. After passing the bar he was hired as an Assistant Attorney General of Missouri, working under state AG John Danforth. He worked in this position from 1974 to 1977, at which point he was hired to be an attorney for the Monsanto Chemical Company.

In 1979 Clarence moved to Washington D. C. to again work for John Danforth who by then had been elected to the US Senate.

From 1979 to 1981 Clarence worked as a legislative assistant focused mainly on energy issues for the Senate Commerce Committee.

From 1981 to 1982 Clarence served as the Assistant Secretary of Education for the Office for Civil Rights. Thomas served as Chair of the Equal Employment Opportunity Commission from May 1982 to March 1990.

In October 1989 he was nominated by George H. W. Bush to be a Federal judge for the United States Court of Appeals for the District of Columbia Circuit.

George H. W. Bush considered Clarence Thomas for the Supreme Court when looking to replace Justice William Brennan in 1990, but ultimately went with David Souter. A year later when Justice Thurgood Marshall stepped down, Bush put forth Clarence as his nominee.

In televised hearings that took place in October 1991, Anita claimed that Thomas sexually harassed her while he was her supervisor at two different government jobs. She claimed he repeatedly asked her out and frequently made sexually-charged and explicit comments to her. Thomas allegedly bragged about "his own sexual prowess" while describing the details of his anatomy.

Clarence Thomas was officially confirmed as an Associate Justice of the Supreme Court of the United States on October 15, 1991. 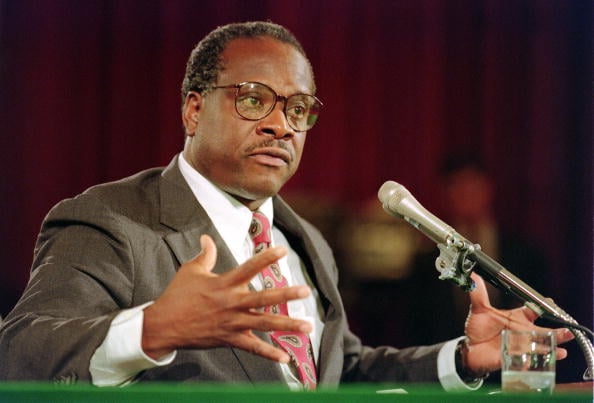 Thomas was married to his college girlfriend Kathy Grace Ambush from 1971 to 1984. They had one child together.

Ginni Thomas and Other Controversies

Ginni Thomas' lobbying career has been a source of controversy for Clarence at various times over the years. In 2000, she was working for the conservative think tank The Heritage Foundation, helping the George W. Bush campaign in collecting resumes for Presidential appointments. This was going on while the Supreme Court was deciding Bush v. Gore, the case that ultimately gave Bush the election. Many people considered this a gross conflict of interest for both Clarence and Ginni.

In 2008 Justices Thomas and Antonin Scalia attended a political retreat put on by the billionaire Koch brothers. Two years later both Justices ruled in favor of Citizens United – the landmark Supreme Court decision that reversed a 100+ year old restriction against corporations spending unlimited money on elections. The legal reversal was championed by wealthy conservatives, like the Kochs, because it gave them the power to use their limitless funds to morph into some of the most feared political donors in America.

In 2009 Ginni founded a nonprofit lobbying group called Liberty Central, whose stated mission was to organize conservative activists, specifically to oppose what it called the "leftist tyranny" of President Barack Obama. The group was primarily focused on opposing President Obama's health care plan, which was almost certainly bound to end up before her husband at the Supreme Court, again creating a massive and obvious potential conflict of interest.

In 2011 Ginni founded a for-profit consulting company called Liberty Consulting, to advise donors in the post-Citizens United landscape. The irony here being that Citizens United allowed Ginni to accept corporate donations to steer policies that would be heard by her husband at the Supreme Court.

In 2011 Clarence came under fire for failing to disclosure income and employment history for Ginni. At the time he claimed his wife's employment and income was "inadvertently omitted due to a misunderstanding of the filing instructions." To rectify the mistake, Thomas released seven pages of amended disclosures including 13 years of income re-statements that included the time when Ginni was employed by the Heritage foundation. These disclosures showed that between 2003 and 2007, Ginni earned $686,589 from the Heritage Foundation.

Ginni reportedly requested that the mayor of Clifton, Virginia remove a banner from the town that read "Welcome to Clifton, Where Black Lives Matter".

On January 6, 2021, a group of Trump supporters violently attacked and looted the United States Capital. Just ahead of the riots, Ginni called on Congress to overturn the results of the election. On the morning of the riots (before the violence broke out), Ginni expressed her love and support for the rioters on her Facebook page, declaring "GOD BLESS EACH OF YOU STANDING UP or PRAYING!".

Ginni routinely shares deranged conspiracy theories on her personal Facebook page. Not long before the riots she posted "No one, and I mean no one, has done more to harm America than the Democrats." She as pushed a false conspiracy theory that George Soros is somehow in charge of the Democratic party and funding a campaign to harm the US government and Donald Trump.

In March of 2022 it was revealed that the Congressional committee investigating the January 6th insurrection had discovered text messages allegedly sent from Ginni Thomas to then-President Donald Trump's Chief of Staff, Mark Meadows. In total, Ginni and Mark apparently traded 29 texts messages between early November and and mid-January 2021. As Vanity Fair reported, the exchanges might be best described as "manic, conspiracy-riddled text messages."

"Help This Great President stand firm, Mark!!!…You are the leader, with him, who is standing for America's constitutional governance at the precipice. The majority knows Biden and the Left is attempting the greatest Heist of our History."

Two weeks later she texted again, urging Meadows to not…

"cave to the elites… I can't see Americans swallowing the obvious fraud."