Napolitano sat on the New Jersey bench from 1987 to 1995 where he tried more than 150 jury trials and sat in all parts of the Superior Court including criminal, civil, equity and family. He has handled thousands of sentencings, motions, hearings and divorces. Napolitano became the state's youngest then-sitting Superior Court judge. He resigned his post in 1995 in favor of private practice then later pursued a writing and television career. He also served as an adjunct professor at Seton Hall University School of Law for 11 years. Currently, Napolitano is a revered visiting professor at Brooklyn Law School. Judge Napolitano has published five books: Constitutional Chaos: What Happens When the Government Breaks Its Own Laws; the New York Times Best Seller The Constitution in Exile: How the Federal Government Has Seized Power by Rewriting the Supreme Law of the Land; A Nation of Sheep; Dred Scott's Revenge: A Legal History of Race and Freedom in America; Lies the Government Told You: Myth, Power, and Deception in American History, also a New York Times Best Seller. His writings have also been published in The New York Times, The Wall Street Journal, The Los Angeles Times, The St. Louis Post-Dispatch, The New York Sun, The Baltimore Sun, The (New London) Day, The Seton Hall Law Review, The New Jersey Law Journal and The Newark Star-Ledger. He lectures nationally on the Constitution and on human freedom. Napolitano is not known to be related to former U.S. Secretary of Homeland Security Janet Napolitano, though he sometimes jokingly calls her "Cousin Janet." 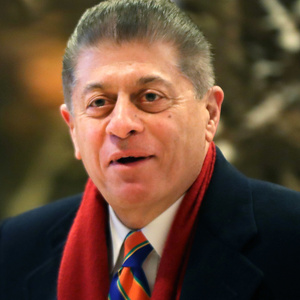