Amal Clooney Net Worth: Amal Clooney is a London-based British-Lebanese lawyer, activist, and author who has a net worth of $50 million. Although she previously worked with the United Nations and the British Foreign and Commonwealth Office, she resigned from the latter role in 2020. As of 2020, she is now a practicing barrister at Doughty Street Chambers. She specializes in international law and human rights. Outside of her professional career, Amal is famous for being the wife of actor George Clooney.

Early Life: Amal Alamuddin was born on February 3rd of 1978 in Beirut, Lebanon. Amal (whose name means "hope" in Arabic) moved to England with her family when she was two years old, settling in Buckinghamshire. Her family fled because of the Lebanese Civil War, although her father later returned to his home country in 1991. She was raised alongside three siblings and attended an all-girls grammar school as a child.

After graduating from secondary school, Amal attended St. Hugh's College in Oxford. After receiving a number of awards for academic excellence, she graduated in 2000 with a BA degree in Jurisprudence. She continued her post-secondary education in 2001, attending New York University School of Law to prepare for her LLM degree. During her time studying in New York, she worked under judge Sonia Sotomayor.

Career: As a qualified lawyer, Alamuddin can work in the UK or the United States. In 2002, she was admitted to the bar in New York, and she subsequently gained similar qualifications in England in Wales. Among her most prominent legal work was at the international courts in The Hague, including the International Criminal Court.

After working in New York City for Sullivan & Cromwell, Amal worked as a clerk at the International Court of Justice. She then worked in The Hague for the Office of the Prosecutor at the UN Special Tribunal for Lebanon. In 2010, Amal returned to Britain to work as a barrister. During this period, she was appointed to a number of United Nations commissions. During this period, she worked on several high-profile cases. These included the 2013 Drone Inquiry. She also represented Julian Assange and the entire state of Cambodia over these years.

Alamuddin is also an accomplished teacher, and between 2015 and 2016 she was a visiting faculty member at Columbia Law School's Human Rights Institute. She taught courses on human rights and human rights litigation. In addition, Amal has given lectures on international criminal law at SOAS Law School, The New School, The Hague Academy of International Law, and the University of North Carolina.

In 2015, Alamuddin began a legal case on behalf of the Armenian government to gain recognition for the Armenian genocide. She continues to represent Armenia on behalf of Doughty Street Chambers and has criticized Turkey's stance as being hypocritical. Numerous Turkish-Armenians had previously campaigned to have the 1915 massacres classified as a genocide.

Also in 2015, Amal brought a case against the Government of the Philippines for the continued detention of former president Gloria Macapagal-Arroyo. The United Nations later came to the conclusion that the former's detention represented a breach of international law. Later that year, Alamuddin joined the legal team that was defending Mohamed Nasheed, the former president of the Maldives. Nasheed had been sentenced to 13 years in part of what has been described as a kangaroo court. She was later credited with strengthening democracy in the Maldives. 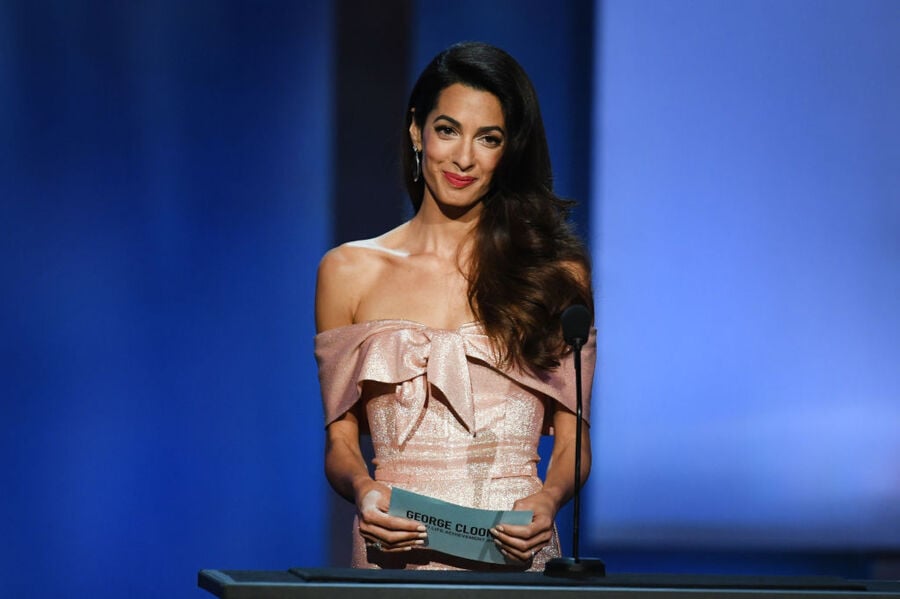 Amal was quite busy in 2015, as she also worked on the so-called "Hooded Men" case. This case involved the illegal interrogation methods used by the British government against Irish citizens. In 2016, Amal spoke at the United Nations for the first time, bringing attention to the rape and slave market organized by ISIL. According to Amal, this included an online slave market on Facebook that exists even to this day.

In 2019, Amal became a special envoy at the British Foreign and Commonwealth Office, and she worked on securing global media freedom in this role. Although she was passionate about this opportunity, she resigned in 2020 in protest after the UK government allegedly broke international law in connection to Brexit.

Relationships: Amal first became engaged to George Clooney in 2014, having met him a year prior through a mutual friend. They married later in 2014, and their ceremony was held in Venice. Their wedding caused something of a media frenzy. In 2017, the media went wild once again when Amal and George announced that they were expecting their first child. Later that year, the couple welcomed twins into the world.

Activism: George Clooney and Amal Alamuddin work together on the Clooney Foundation, which the pair co-founded in 2016. The organization strives to advance justice across the world. The couple also started the Amal Clooney Scholarship, which provides funding for one female Lebanese student to enroll in a 2-year International Baccalaureate programme.

Real Estate: Amal and her husband George Clooney have an extensive real estate portfolio. They own properties in both the United Kingdom and in the United States. Among their most notable residences is a villa in Lake Como and a $13 million mansion in England. Clooney owns an additional $13 million mansion in Laglio, Italy, and the couple also once owned a vacation home in San Lucas, Mexico.

In 2016, the pair purchased an apartment in the luxurious One Hundred Fifty-Third Street building in New York City. Although the cost of this apartment is unknown, the penthouse suite on this complex is worth $65 million. Some of their less notable properties are in places like Las Vegas and Studio City. Many of these properties were purchased long before Clooney married Amal.