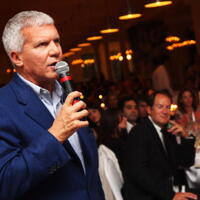 Larry Gagosian net worth and salary: Larry Gagosian is an American art dealer and entrepreneur who has a net worth $600 million dollars. Born in Los Angeles, California, Larry Gagosian, began selling posters near UCLA in the late 70s. He then began re-selling works of contemporary art, and his business grew exponentially. By the early 80s, he'd become known as "Go-Go", and had earned a reputation for selling art quickly. He opened his own gallery in the mid-80s, and began working with a number of notable collectors, including Charles Saatchi and Samuel Newhouse, Jr. He went on to pay some of the highest prices ever for particular works of art on behalf of his clients. He is known for having an excellent eye and for producing gorgeous gallery showings, but he also has a reputation for bending the truth if it suits him, including profiting from the death of an artist and copyright infringement. He currently owns four galleries in the US, two in London, and one each in Rome, Athens, Paris, Geneva, and Hong Kong. He jets between in each gallery on a $40 million Bambardier Global Express private jet. Larry reportedly brokers over $1 billion worth of art transactions every year across the globe.