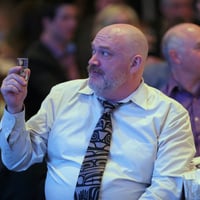 Keith Colburn net worth: Keith Colburn is an American fisherman and reality television star who has a net worth of $1.5 million. He earned his net worth as a commercial fisherman and from his role on the documentary/reality television series Deadliest Catch. This Discovery Channel series chronicles the real life events aboard fishing vessels during the Alaskan king crab and C. opilio crab fishing season. The adventures take place on the Bering Sea; the base of operations for the fishing boats is located in The Aleutian Islands port of Dutch Harbor, Unalaska, Alaska. The show gets its name from the inherent risk of serious injury or even death associated with this sport. Deadliest Catch made its television debut on April 12, 2005 on the Discovery Channel and is currently in its tenth season; it can be seen in over 150 countries. Unlike many of the fisherman portrayed on Deadliest Catch, Keith Colburn is a first generation fisherman. He caught the bug for the fishing lifestyle back in 1985 after joining his friend Kurt Frankenberg on a trip to Kodiak, Alaska. The pair started as true greenhorns on the ship, the Alaska Trader, which was a 135-foot crabber/tender. In 1988, three years after arriving in Alaska, Colburn became a Deckhand on the Wizard, and by 1990, moved from the deck of the ship to the pilothouse where he worked as the Skipper. Colburn purchased his first fishing vessel in 2002 – a 100′ crabber called the Sirene. but continued to operate the Wizard. In 2004, he sold the fishing rights to the Sirene in a government run fleet reduction program (which led to a reduction of the crabbing fleet from 250 to 80 crabbers), and subsequently purchased the Wizard so he could secure his presence in the crabbing industry. Today he continues to work as the Captain and Owner of one of the Bering Sea's premier crab vessel, the Wizard.