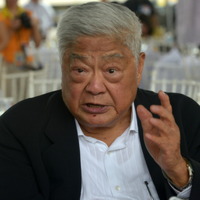 John Gokongwei Jr. Net Worth: John Gokongwei Jr. is a Chinese Filipino businessman who has a net worth of $4.8 billion. The founder and Chairman of one of the largest conglomerates in the Philippines, JG Summit, John Gokongwei Jr. made his debut as a billionaire on better understanding of his holdings. Nowadays, JG holds various business interests in airlines, banking, hotels, real estate, property development, petrochemicals, power generation, publishing, food manufacturing, and telecommunications. As for the companies that JG Summit Holdings has major holdings in, they include Digital Telecommunications Philippines and Cebu Pacific. Thanks to the abundant profits of the conglomerate, John Gokongwei Jr. has become one of the wealthiest individuals in Southeast Asia. Most recently, the group's budget carrier Cebu Air went public in what was the country's largest IPO in 2013, raising $620 million. Other family members are involved in JG Summit operations; most notably John's brother James Go chairs JG Summit, whereas his son Lance is president.