Jimmy Hoffa net worth and salary: Jimmy Hoffa was an American union leader who had a net worth equal to $13 million at the time of his death after adjusting for inflation. Jimmy Hoffa was the head of the President of the International Brotherhood of Teamsters from 1957 to 1971. When Jimmy first came into power, the union had around 70,000 members. Within a few years under his leadership, its numbers swelled to 150,000 and then 400,000… peaking at over 1 million by the early 1950s.

During his career, Jimmy was heavily involved with organized crime. In 1964 he was convicted of bribery, fraud and jury tampering. He went to jail in 1967 under a 13 year sentence. In 1971 he was pardoned by President Nixon and released early from prison. After being released from prison, the teamsters union awarded Jimmy a one-time lump sum pension of $1.7 million. That's the as around $13 million after adjusting for inflation today.

Jimmy's crimes were connected to the massive pension fund he controlled as union President. The pension topped $8 billion at his peak. Hoffa and his associates allegedly made improper loans with the pension money, and helped the mafia launder large quantities of illicit funds.

Jimmy Hoffa disappeared in 1975 and was legally declared dead in 1982.

Personal Life: Jimmy married Josephine Poszywak in 1936. They had two children together, a daughter named Barbara and a son, Jimmy Jr.. The family had two homes, a modest abode in Detroit which was purchased in 1939 for $6,800 and a summer cottage in Orion Township, Michigan. 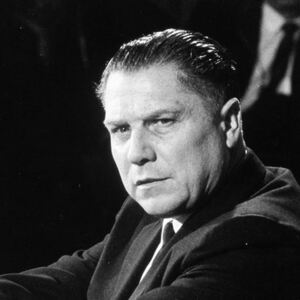