Jerry Richardson net worth: Jerry Richardson is an American businessman and NFL team owner who has a net worth of $2 billion dollars. Jerry Richardson is probably most famous for being the majority owner and founder of the Carolina Panthers of the National Football League. Jerry was born July 11, 1936 in Spring Hope, North Carolina. He played football at Wofford College in Spartanburg, SC, and was also a player in the NFL for the Baltimore Colts. Jerry earned the bulk of his early fortune in the fast food industry and amazingly, his entire empire was launched with an NFL bonus check. In 1959, Jerry took the $4744 bonus check he received after the Baltimore Colts won a Championship and invested in the country's first Hardee's franchise. With a fellow player from his college days named Charlie Bradshaw, the two launched Flagstar Foods. Over the next several decades, Flagstar expanded to the point where it controlled 2500 restaurants with 100,000 employees.

Richardson became the first former NFL player since George Halas to become an owner when the Carolinas were unanimously awarded the NFL's 29th franchise. Richardson and a group of minority partners put up $206 million, the majority of which came from Jerry's personal bank account, to acquire the franchise rights. Today the Panthers are worth between $1.6 and $2 billion. The team generates $325 million in revenue per year and $80 million in profit.

Richardson and his wife, Rosalind Sallenger Richardson, have two sons, Jon and Mark, and a daughter, Ashley Richardson Allen, of Charlotte. The Richardsons have nine grandchildren and live in Charlotte. Jerry is an active owner of the team, however he leaves most day-to-day decisions regarding personnel and game strategy to his front office staff and coaches.

Jerry had never missed a Carolina home game until he was hospitalized before a Monday Night Football game against division rivals Tampa Bay, on December 8, 2008. He had a history of heart trouble and had undergone quadruple bypass surgery in 2002. He received a new heart on February 1, 2009 and his doctors report that he is recovering well from the transplant. He supports his team in good and bad times, wins and losses. His nickname around the organization is "Big Cat".

In December 2017, it was announced that Jerry had stepped down from his position with the Panthers organization amid sexual misconduct allegations. Shortly thereafter Jerry decided to put the team up for sale. They are projected to sell for as much as $3 billion. 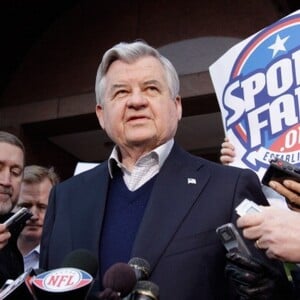