What is Jerry Jones' net worth and salary?

Jerry Jones is an American CEO, entrepreneur, and owner of the NFL's Dallas Cowboys. Jerry Jones has a net worth of $11 billion. Jerry Jones earned his first fortune as an executive vice president of Modern Security Life of Springfield, in Missouri. He was also the founder and owner of Jones Oil and Land Lease, which searches for natural resources of oil and gas in Arkansas. Jones purchased the Dallas Cowboys in 1989 for $140 million. Today the team is worth at least $6.5 billion.

Jerry Jones was born in Los Angeles, California, in 1942 and spent his childhood in North Little Rock, Arkansas. He attended North Little Rock High School followed by the University of Arkansas on a football scholarship. During his time in college, he was a member of the Kappa Sigma fraternity, a co-captain of the football team, and an all Southwest Conference offensive lineman. At Arkansas, Jones' teammate was Jimmy Johnson, whom Jones would later hire as his first head coach after he purchased the Cowboys.

After graduating from college in 1965, Jones borrowed a million dollars from the Teamsters union (which was run by Jimmy Hoffa at the time) to open up a number of Shakey's Pizza restaurants in Missouri. That experiment failed and Jones went to work at Modern Security Life of Springfield, his father's insurance agency. He was the executive vice president of the firm. He tried to start several businesses in the late 60s. At one point, again using Teamster's money, Jones tried to buy the NFL's San Diego Chargers.

Eventually, he went back to Arkansas to get his Master's degree in Business and graduated in 1970. Jones launched Jones Oil and Land Lease, a privately held company that does natural resource prospecting. He spent the next two decades making money and plotting his return to football.

In 2008, Jones created Legends Hospitality as a partnership with Yankee Global Enterprises. Legends is a food, beverage, merchandise, retail and stadium operations company serving entertainment venues such as Cowboys Stadium.

Jerry Jones bought the Dallas Cowboys on February 29, 1989, for $140 million. That's the same as around $300 million today after adjusting for inflation. Soon after the purchase he fired Tom Landry, the only coach in the team's history, and hired his old Arkansas teammate Jimmy Johnson. He also fired general manager Tex Schramm and took over complete control of football matters himself. The first season under Jones' ownership, the Cowboys finished 1-15. Jones and Johnson turned the team around quickly and the next season the team went 7-9. In 1991, the Cowboys went 11-5 and made the playoffs, but lost in the second round. In the 1992-93 season, the Cowboys defeated the Buffalo Bills in Super Bowl XXVII. The following year they defeated the Bills again to win Super Bowl XXVIII. 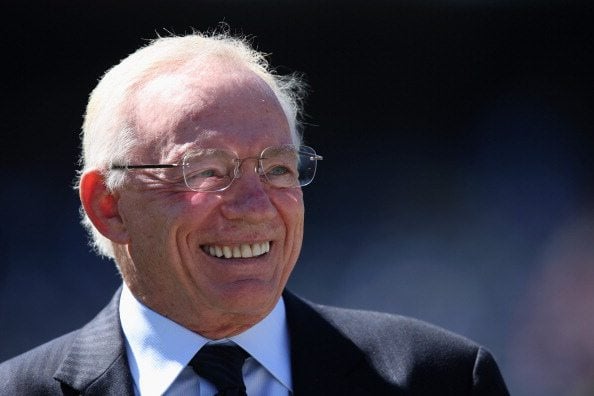 During Jones' ownership, the Cowboys' value has appreciated from $140 million to about $5.5 billion, making Jones a multi-billionaire in the process. Jones has been credited with much of the success of the NFL overall since 1989. For instance, he personally championed the then-fledgling network Fox becoming the NFC's primary broadcast network at a time when ABC, CBS, and NBC were trying to convince the NFL to take less revenue for television rights. The move to Fox significantly increased television revenues and ultimately turned the NFL into the world's richest sports league with revenues of more than $10 billion each season.

Jones is one of two owners in the league (the other is Cincinnati's Mike Brown) who have either the title or powers of general manager.

Jones is the subject of the 2008 book Playing to Win by David Magee. In the book, Jones admitted he handled the firing of Landry poorly and accepted some blame for the disintegration of his relationship with Jimmy Johnson. To this day, Johnson is not included in the Dallas Cowboys "Ring of Honor." In 2014, he was asked why Johnson was not in the Ring of Honor despite his two Super Bowl victories as coach of the Cowboys. Jones said: "Disloyalty … I couldn't handle the disloyalty."

Jones was inducted into the Pro Football Hall of Fame in 2017.

While in college, he met his wife Gene, a one time a beauty pageant winner. They have three children, Stephen, Jerry Jr., and Charlotte. They also have nine grandchildren. Their son, Stephen, graduated from the University of Arkansas and holds the position of COO, executive vice president, and director of player personnel for the Dallas Cowboys. Their daughter, Charlotte, is a graduate of Stanford and also holds a position with the Cowboys, as vice president and director of charities and special events. Their youngest, Jerry Jr., attended Georgetown University and Southern Methodist University, where he earned his degree in law. Jerry Jr. is the chief sales and marketing officer, as well as vice president of the Cowboys.

Jerry Jones and his wife own an enormous home in the Highland Park area of Dallas, worth around $20 million. Jones also heads up the real estate development firm Blue Star Land. In 2018, the company paid $38 million for a 200-acre site to be developed into a development called Star Business Park. In 2019, the company picked up another 60 acres nearby. Blue Star wants to create a 400,000 square foot merchandising distribution and sales center for the Cowboys on part of the property. 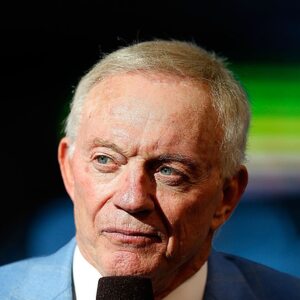