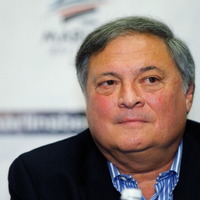 Jeffrey Loria Net Worth and salary: Jeffrey Loria is an American art dealer and the owner of the Miami Marlins Major League Baseball team. Jeffrey Loria has a net worth of $500 million dollars. Jeffrey Loria was born November 20, 1940 in New York City and raised in Manhattan where he took an early interest in baseball, attending his first New York Yankees game in the late 1940s. Loria attended Stuyvesant High School and Yale University, where he initially took pre-med courses. With a requirement to take a history class, Loria chose art history. After college, he worked in a newly established art-buying program for Sears. In 1965, at the age of 24, he opened his private art dealing business, Jeffrey H. Loria & Co., on Manhattan's Upper East Side and wrote a book, "Collecting Original Art". He specializes in 20th century masters. His collection includes works by Pablo Picasso and Henry Moore. Loria graduated from Columbia Business School in 1968. In 1999, Loria bought a 24 percent stake in the Montreal Expos for $12 million and became the managing general partner. Soon after, Loria ended up with 94 percent of the team at a valuation of $50 million. He sold the Expos in 2002 for $120 million and bought the Florida Marlins for $158.5 million.