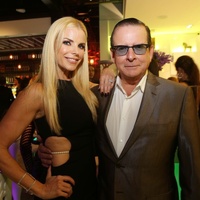 Herman Echevarria net worth: Herman Echevarria was a Miami-based businessman and politician who had a net worth of $30 million dollars. The husband of Alexia Echevarria, one of the stars of The Real Housewives of Miami, Herman Echevarria was also the owner of Venue Magazine, and the former Hialeah City Council President and chairman of the Hialeah Chamber of Commerce and Industries. He was the chairman and CEO of BVK/Meka, a full-service international marketing and communications firm based in Miami and Milwaukee, and is a Cuban-born multimillionaire, who took over in 2002 as the chairman of the Miami-Dade 2000 Marketing Initiative. It was a marketing initiative launched by the Beacon Council that promotes Miami-Dade County as a premier business destination through pro-active and targeted marketing campaigns. Also, he has been responsible in raising over $3 million for such campaigns from the private and public sectors. Alexia and Herman were definitely a "who's who" couple in Miami and Venue Magazine is known not only for being on the cutting edge of fashion, but also for recognizing new talent for modeling and acting in the Latin community. In 2014, it was reported that Alexia and Herman owed the IRS $94,078.44 in taxes for 2009. According to the Miami-Dade County clerk's office, the Echevarrias had a lien on their Miami Beach pad, but the couple has since paid the back taxes and is no longer in danger of losing their home. Unfortunately, Herman died in September 2016 at the age of 61.