Henry Blodget net worth: Henry Blodget is an American businessman and equity research analyst who has a net worth of $50 million dollars. Henry Blodget is best-known for being the founder of the website Business Insider, which is today known simply as Insider.com.

Henry Blodget was born in Manhattan, New York in 1966. Henry is the son of a commercial banker. He graduated from Yale University and then taught English in Japan. At some point he moved to San Francisco where he supported himself by giving tennis lessons while pursuing a writing career. He worked as a proofreader for Harper's Magazine and was a freelance journalist.

In 1994 he pivoted from writing to finance when he landed a spot in Prudential Securities' corporate finance training program. He then moved to Oppenheimer & Co. working in equity research. His 1998 prediction that Amazon.com stock would jump in price gained him notoriety.

He jumped over to Merrill Lynch where at one point he reportedly earned $12 million in a single year. During this time he began to make regular appearances on CNBC.

In 2001 he accepted a buyout from Merrill Lynch in 2001. Blodget was charged with civil securities fraud by the U.S. Securities and Exchange Commission in 2003. He is permanently banned from the securities industry and had to pay a $4 million fine.

Business Insider: After leaving Wall Street, Blodget became the co-founder, Editor in Chief, and CEO of Silicon Alley Insider. The website eventually morphed into BusinessInsider.com and then simply Insider.com. On September 29, 2015, it was revealed that 88% of BusinessInsider had been acquired by German media conglomerate Axel Springer for $343 million. That brought Axel Springer's total stake up to 97%, with Amazon.com's Jeff Bezos owning the remaining 3%. It is believed that at the time of the sale Henry Blodget owned 5-10% of BI, giving him a windfall of $17 – $34 million.

In 2007 he published The Wall Street Self-Defense Manual: A Consumer's Guide to Intelligent Investing. In 2011 he started co-hosting The Daily-Ticker for Yahoo! Finance. 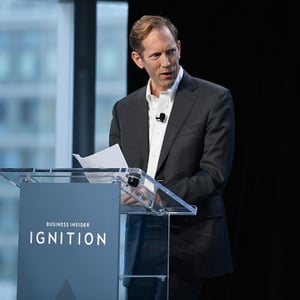