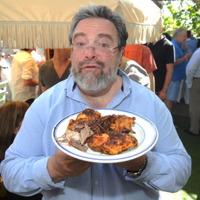 Drew Nieporent net worth: Drew Nieporent is an American businessman who has a net worth of $50 million. Drew Nieporent has earned his net worth as a New York City restaurateur, and owner of Myriad Restaurant Group. Myriad owns and operates several restaurants, many of them are known as celebrity hang outs and some of these restaurants even have celebrity co-owners. These fine dining establishments are known for their difficulty in obtaining reservations; even Henry Kissinger could not get in. Two of Nieporent's restaurants Nobu and Nobu London both earned two Michelin stars; he is partnered in these restaurants with celebrity chef Nobu Matsuhisa and actor Robert De Niro. Drew is a 1973 graduate from Stuyvesant High School and Cornell University in 1977. He holds a degree from the School of Hotel Management. He was a member of the Quill and Dagger society at Cornell, and began his professional career at Maxwell's Plum and Tavern on the Green both located in New York City. A Matter of Taste is a documentary about Nieporent that was filmed in 2011. Some of the restaurants owned by the Myriad Group include Tribeca Grill, Nobu, Nobu London, Nobu Next Door, Nobu 57, Centrico, Pulse, The Coach House, Proof on Main, and Corton. They also own the store called Crush Wine & Spirits along with co-owners with Josh Guberman and Robert Schagrin.