How much is David Heinemeier Hansson Worth?

David Heinemeier Hansson Net Worth: David Heinemeier Hansson is a Danish programmer who has a net worth of $40 million. David Heinemeier Hansson was born October 15, 1979 in Copenhagen, Denmark. In 1999, Hansson founded and built a Danish online gaming news website and community called Daily Rush, which he ran until 2001. Hansson offered Jason Fried, co-founder of Basecamp, help with PHP coding and Hansson was subsequently hired by Fried to build a web-based project management tool, which ultimately became 37signals' Basecamp software. To aid the development process, Hansson used the then-obscure Ruby programming language to develop a custom web framework. The framework he created was later released separately from the project management tool as the open source project called Ruby on Rails. In 2005, Hansson was recognized by Google and O'Reilly with the Hacker of the Year award for his creation of Ruby on Rails. After graduating from the Copenhagen Business School and receiving his bachelor's degree in Computer Science and Business Administration, Hansson moved from Denmark to Chicago, Illinois (2005). David Heinemeier Hansson cites photography and race car driving as his hobbies. He participated in the 2012 24 Hours of Le Mans driving for OAK Racing and also drove a Morgan-Nissan P2 car for Conquest Racing in the American Le Mans Series, winning two races in the season. David Heinemeier Hansson joined OAK Racing full-time in 2013, taking five 2nd-place finishes to finish 2nd in the Trophy for LMP2 Drivers. 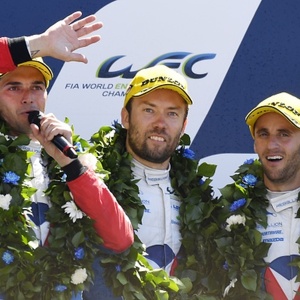