What is Berkshire Hathaway's net worth?  Berkshire Hathaway's net worth is $530 billion.  Berkshire Hathaway began its life as two separate textile manufacturing companies, one based in Rhode Island, the other in Massachusetts.  The two companies, Valley Falls Company, and Berkshire Cotton Manufacturing Company, merged in 1929, to form Berkshire Fine Spinning Associates.  In the mid-1950s, Berkshire Fine Spinning merged with Hathaway Manufacturing Company, another Massachusetts-based textile firm, to form Berkshire Hathaway.  The textile industry had begun to fall of somewhat after the 1920s, and Hathaway had encountered cash flow issues, however, the merger seemed to stabilize both companies somewhat.  In the early 1960s, entrepreneur and sometime musician, Warren Buffet, purchased shares of the company.  However, the textile business continued to decline, so Mr. Buffet decided to sell his shares.  He, and the primary owner of Hathaway, agreed on a selling price, but when the paperwork arrived, Hathaway's owner, Seabury Stanton, had altered the numbers.  In a fit of pique, Warren Buffet decided not sell.  Though it was not a wise financial decision, since the company was failing, Mr. Buffet has since diversified the company's holdings, and turned it into the eighth largest public company in the world.  The company now owns and operates an insurance arm, including GEICO, an utilities and energy group, multiple clothing manufacturers, including Fruit of the Loom, building products manufacturers, financial groups, and multiple retail arms.  It employs 260,000 people. 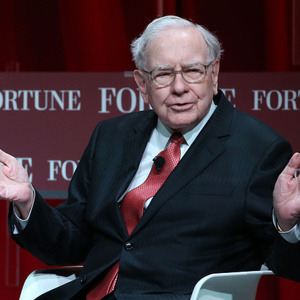