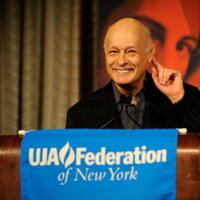 Clive Calder net worth: Clive Calder is a South African businessman and record executive who has a net worth of $2.3 billion. Clive Calder earned his net worth by being the co-founder of Zomba Group and its subsidiary company Jive Records. Clive Ian Calder was born in Johannesburg, South Africa in December 1946. Growing up Clive played bass guitar for different bands and read tax manuals for fun. In 1971 he started his first record company in South Africa. After moving to London he started the Zomba Group with Ralph Simon. By 1978 Zomba included management and publishing and opened more offices, this time in New York City. The first Zomba record label Jive was formed in 1981 and focused on rap and hip hop music. Another label Silvertone Records started in 1988 and Clive became sole owner of Zomba in 1990. Jive worked with popular groups and artists such as NSYNC, Britney Spears, and the Backstreet Boys. Calder sold Zomba in 2002 for $2.74 billion to a German media group. Calder left the music business in 2003 and later Jive's artists were moved to RCA. At one time Calder was the wealthiest music billionaire in the U.K. Calder now lives in the Cayman Islands and spends time with his foundation Elma Philanthropies in Africa.