Chris Ferguson Net Worth: Chris Ferguson is an American poker player who has a net worth of $80 million. Born in 1963 in Los Angeles, California, Chris Ferguson earned his computer science Ph.D. from UCLA. He first took up poker as a kid and continued to play online during college. In the mid-'90s, Ferguson started entering poker tournaments around California, and took part in his first World Series of Poker in 1995.

Ferguson has since had five WSOP bracelets and has 63 money finishes. His best result came in 2000 when he won the main event. Ferguson also won the 2008 NBC National Heads-Up Poker Championship. He is the only poker player who has also won three WSOP circuits events in addition to earning his bracelets. In 2011, he was part of an investigation into Full Tilt Poker by the United States Department of Justice. Ferguson served as the online poker company's director. He and two others were accused of taking money from their own customers in order to "line their own pockets". The DOJ alleged Full Tilt Poker was a Ponzi scheme that robbed customers of more than $400 million dollars. Ferguson has several unique talents, including being able to throw cards so quickly, they cut through various fruits and vegetables. 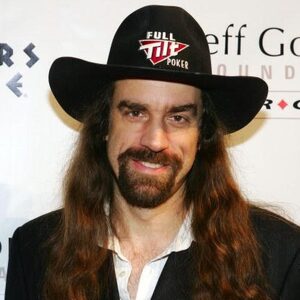