How much is Chip Ganassi Worth?

Chip Ganassi Net Worth: Chip Ganassi is a former American racecar driver and current racecar owner who has a net worth of $40 million. Chip Ganassi was born May 24, 1958 in Pittsburgh, Pennsylvania where he won his first auto race in a Formula Ford at the age of 18. He began his CART racing career in 1982 upon graduating from Duquesne and competed in the Indianapolis 500 five times, with a best finish of 8th in 1983. His career was cut short by a big crash that injured him at Michigan in 1984, although he returned to race briefly in CART and IMSA in 1986, Ganassi purchased an interest in Patrick Racing in 1988 and was part of the team that won the 1989 Indianapolis 500. In 1990, he split off and formed his own team, Chip Ganassi Racing, with Target as the principal sponsor. He also became active in the NASCAR circuit. He currently operates two cars in the NASCAR Sprint Cup Series, three cars in the IZOD IndyCar Series, and one car in the Grand-Am Rolex Sports Car Series Daytona Prototype class. Ganassi teams have won CART titles in 1996, 1997, 1998 and 1999 and IndyCar Series championships in 2003, 2008, 2009, 2010 and 2011. His teams have also won the Indianapolis 500in 2000, in 2008, in 2010, and 2012, as well as 89 IndyCar Series races. His NASCAR race team is based in Concord, North Carolina. The IndyCar Series teams are located in Indianapolis and Brownsburg, Indiana. 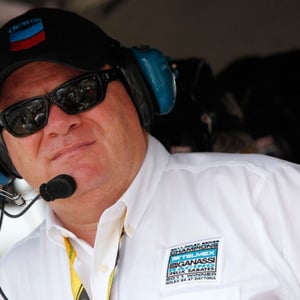