Wayne Weaver net worth: Wayne Weaver is an American businessman who has a net worth of $1 billion dollars. Wayne Weaver was born in Columbus, Georgia, and began his professional career working for the Brown Group, a clothing company based in St. Louis, Missouri. After climbing the ranks with the Brown Group, he founded his own shoe company in 1978 and sold it twenty years later. He currently owns Shoe Carnival and Nine West. In 1993, he became a majority owner of the Jacksonville Jaguars. He was the first majority owner of the team. He remained part of the team ownership until 2011, when he and his partners sold the team to Shahid Khan, a businessman based in Illinois. The sale was reportedly worth $760 million, and was finalized in January of 2012. He and his wife live in a massive home in Jacksonville, Florida. They now focus primarily on running the Jaguars Foundation, an organization that grants $1 million per year to initiatives that assist economically and socially disadvantaged children and families. 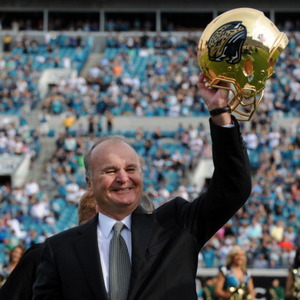