What is Vikram Pandit's Net Worth and Salary?

Vikram Pandit is an Indian-American banker who has a net worth of $200 million. Vikram Pandit served as the CEO of the financial services corporation Citigroup from 2007 to 2012. Before this, he worked at Morgan Stanley for 22 years, and was integral in developing the company's prime brokerage division and electronic trading platform. In 2016, Pandit created and became the chairman and CEO of the operating company the Orogen Group.

Vikram Pandit was born on January 14, 1957 in Nagpur, India to a wealthy family of Marathi ethnicity. His father, Shankar, served as an executive director at the company Sarabhai Chemicals. As a youth, Pandit went to Bishop Cotton School, and then to Dadar Parsee Youths Assembly High School in Mumbai. At the age of 16, he moved to the United States, where he enrolled at Columbia University. Pandit earned his BS degree in electrical engineering from Columbia in 1976; he subsequently earned his MS from Columbia in the same field in 1977. He eventually decided to transition to economics, and went on to obtain both an MBA and a PhD in finance from Columbia Business School.

In 1983, Pandit became an associate at the financial services corporation Morgan Stanley, in the process becoming one of the first Indians to join the company. Working up the ranks, he was named the managing director and head of Morgan Stanley's US Equity Syndicate in 1990. Four years after that, Pandit became the managing director and head of the company's global institutional securities division.

At Morgan Stanley, Pandit was a key player in developing the company's prime brokerage division as well as its electronic trading platform. In 2000, he attained his highest position when he became president and COO of Morgan Stanley's global institutional securities and investment banking operations. Pandit parted ways with the company in 2005, ending his 22-year career at the firm. 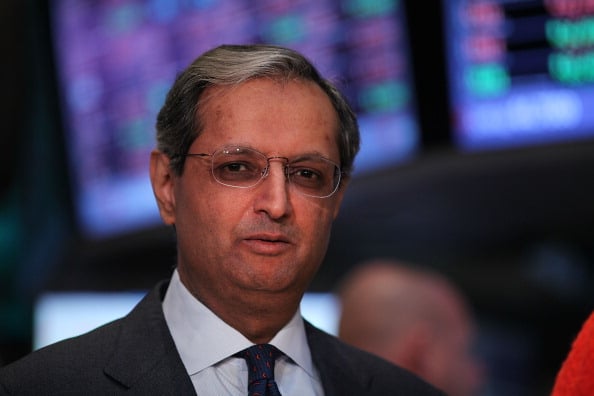 In early 2006, Pandit partnered with fellow former Morgan Stanley employees John Havens and Guru Ramakrishnan to launch the hedge fund Old Lane LLC. The following year, the company was purchased by Citigroup for $800 million; as a result, Pandit and Havens became members of Citi's leadership. Pandit was soon appointed chairman and CEO of the Citi Alternative Investments unit, and later was put in charge of the company's Institutional Clients Group. In December of 2007, he was named Citigroup's new CEO.

For his first full year as CEO of Citigroup in 2008, Pandit earned a total compensation of $38.2 million. Early the next year, due to the company's financial struggles, he demanded that his salary be set at $1 a year with no bonus until Citigroup returned to profitability. Pandit's total compensation for 2009 ended up being $128,751. After working for two years on the $1-a-year salary, he had his annual base raised to $1.75 million thanks to his progress in turning Citigroup's finances around. Pandit continued his success, turning in five straight quarterly profits to become one of the highest-paid CEOs in the world.

In October of 2012, Pandit abruptly and unexpectedly resigned as the CEO of Citigroup, and was replaced by Michael Corbat. Controversy soon arose surrounding the circumstances of his departure, which came after a series of fraud allegations and investor payouts. Bloomberg News reported that Pandit had actually been forced out of his position by the company board for damaging investor confidence and relations with regulators. Later, the New York Times named chairman Michael E. O'Neill as the leader in a long, covert effort to oust Pandit that resulted in his choice of either resigning or being fired.

Among his post-Citigroup business ventures, Pandit partnered with fellow Indian executive Hari Aiyar in 2013 to purchase a 3% equity stake in JM Financial. The two also created a $100 million fund to invest in the company's distressed assets. Later, in 2016, Pandit partnered with Atairos Group to form an operating company called the Orogen Group. With backing from Comcast Corporation, the Orogen Group invests in various financial services companies.

Pandit is a member of a number of boards, including that of his alma mater Columbia University and its Business School. He also sits on the boards of Trinity School and the Indian School of Business, and is the director of the Institute of International Finance. Earlier, from 2000 to 2003, Pandit served on the board of the New York City Investment Fund.

With his wife Swati, Pandit has two children named Maya and Rahul. He is a naturalized US citizen, and resides on the Upper West Side of Manhattan in New York City.

In 2008, for his contributions to the business industry, Pandit received the Padma Bhushan, one of the most prestigious civilian awards in India.