Travis Kalanick net worth and salary: Travis Kalanick is an American entrepreneur who has a net worth of $3 billion dollars. Travis is best-known for being the controversial co-founder of Uber.

Travis Kalanick was born in Los Angeles, California on August 6, 1976. He grew up in the LA suburb of Northridge. He went on to study Computer Engineering at the University of California Los Angeles. He ultimately chose to drop out so he could co-found Scour, Inc., a multimedia search engine. His group also founded Scour Exchange, a peer-to-peer file-sharing program. Multiple film boards sued Scour, Inc., and the company subsequently filed for bankruptcy. In 2001, he launched Red Swoosh, another peer-to-peer file-sharing company. Red Swoosh eventually sold to Akamai Technologies for $19 million.

Uber: In 2009, he co-founded Uber, a mobile application for searching and finding ride share and person-to-person car rentals in major cities. It currently operates hundreds of cities around the world and has been copied by a number of other similar rideshare apps. Uber's success transformed Travis into one of the most important and controversial tech CEOs on the planet. In June 2014, Uber raised a massive investment round that valued the company at $18.2 billion. The investment totaled $1.6 billion worth of financing from several different parties, most notably the mutual fund Fidelity Investments. At that valuation, Travis Kalanick officially became a billionaire for the first time with an implied ownership stake of 5.55%. At its peak as a private company, Uber was worth as much as $120 billion. At that value, Travis was worth around $6 billion on paper.

Ouster From Uber: In June 2017, Travis Kalanick was forced to resign as CEO of Uber after a barrage of controversies that had plagued the company for over a year. Soon after leaving the company he sold 30% of his shares for $1.4 billion to Japanese investment conglomerate, Softbank. That transaction combined with previous private sales made Travis an official liquid billionaire (as opposed to a paper billionaire).

Uber went public on May 10, 2019. By the end of trading the company was worth around $77 billion. At that level, his remaining Uber shares were worth $4.9 billion. Travis also sold 3.7 million shares at the IPO which generated around $170 million in cash.

Uber Stock Sale: In December 2019 Travis revealed he had stepped fully away from Uber, removing himself from the board and other duties. He also revealed that he had sold 90% of his uber shares. He sold his shares in the range of $27 to $30 per share, for proceeds of roughly $2.7 billion. Selling his shares proved to be a wise decision in the short term as the stock price dropped roughly in half over the next 6 months, hitting an all-time low of $14.82 (as of this writing) in March 2020 at the height of the COVID pandemic. Fast forward to December 2020, a year after selling his shares for $27-30, Uber's prospects had improved considerably with the stock price topping $54 on December 4, 2020. At that level Travis' former stake would have grown to be worth $5 billion, so he essentially left $2.3 billion on the table.

All combined, Travis Kalanick's net worth today is $3 billion.

Real Estate: In September 2019 Travis paid $37 million for a lavish New York City penthouse that was still under construction at the time of purchase. Not only does the apartment have nearly 7,000 square-feet of living space, it also has a private rooftop pool.

In May 2020 Travis was revealed as the buyer of a $43 million mansion in Bel-Air. 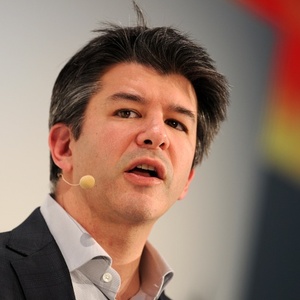