Tony Hayward net worth and salary: Tony Hayward is a British businessman who has a net worth of $40 million. Tony Hayward was born in Slough, Buckinghamshire, England in May 1957. He is best known as the former chief executive of the oil and energy company BP. Tony was the eldest of seven children.

He graduated from Aston University and earned a PhD from the University of Edinburgh. He joined BP in 1982 as a rig geologist. He worked in London, France, Aberdeen, China, and Glasgow. He became executive assistant to Lord Browne. He moved to Colombia in 1992 as an exploration manager and then became president of the company's operations in Venezuela in 1995. He went back to London in 1997 as the director of Exploration. In 1999 Hayward became the vice-president of BP Amoco Exploration and Production and a member of the Upstream executive committee. In 2002 he became executive vice-president. In 2007 Hayward replaced Lord Browne as the chief executive of BP. He received a salary of over $1 million pounds with a bonus in 2008 of nearly $1.5 million pounds and in 2009 of just over $2 million pounds. After the Deepwater Horizon oil spill Hayward was replaced by Bob Dudley in 2010. Hayward became chairman of the UK gas-to-liquids company CompactGTL in 2013. His venture firm Vallares merged with Turkish oil firm Genel Energy in 2011 and created a $4.5 billion company. 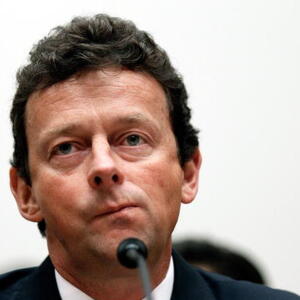