Terry Semel Net Worth: Terry Semel is an American corporate executive who has a net worth of $300 million. Terry Semel was born February 24, 1943 in Brooklyn, New York. He is best known as the former chairman and CEO of Yahoo! Incorporated. Previous to his time at Yahoo!, Semel spent 24 years at Warner Bros., where he served as chairman and co-chief executive officer. Yahoo! offered Semel $110 million as a bonus to join Yahoo! in 2001 and Semel came on board. He was subsequently granted options to purchase Yahoo! stock at pretty much 'low closing price' and Semel also took Yahoo! up on that offer, netting $450 million between 2003 and 2006. His stock-purchase strategy, however, caused Yahoo!'s value to take a nosedive. The company was now teetering and Semel was still profiting because his salary was only $1, but his stock options were still upwards of $70 million. During his time at Yahoo! founders Jerry Yang and David Filo suggested Semel buy Google and Semel met with Google cofounders Larry Page and Sergey Brin, which led to fruitless negotiations. In June 2007, Semel resigned as CEO. Semel was the recipient of the UCLA Medal, that University's highest honor in 2005, and was also awarded the Legend in Leadership Award from the Chief Executive Leadership Institute of the Yale School of Management. 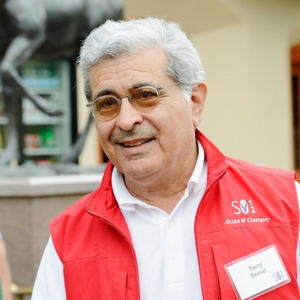