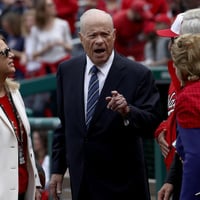 Ted Lerner net worth: Ted Lerner is a businessman who has a net worth of $5.5 billion dollars. That makes Ted Lerner one of the richest people in Maryland. Born in the Washington, D.C. area, Ted Lerner went on to serve in the American Army during World War II. After returning to the United States, he graduated from George Washington University, and then from George Washington University Law School. He founded Lerner Enterprises in 1952. His wife loaned him $212 to start the real estate firm, which has grown into the largest private land ownership in the D.C. area. The company owns 750 home lots, another 7000 apartments, and over 20 million square feet of space spread out over a wide range of commercial and retail properties. Lerner Enterprises is continuing to add to their portfolio with multiple properties being developed in Tyson's Corner and Dulles Town Center. Mr. Lerner is also the majority owner of the Washington Nationals, and part owner of the Mid-Atlantic Sports Network.