What is Sundar Pichai's Net Worth and salary?

Sundar Pichai is an Indian-American business executive who has a net worth of $600 million. Sundar Pichai is currently the Chief Executive Officer of Alphabet Inc, the umbrella company that owns Google. Sundar was named CEO of Google in August 2015. The move came as part of a restructuring process which made Alphabet Inc. the parent company of Google. It has also been argued that the re-arrangement allowed founders Larry and Sergey to retreat as the public faces of Google as the company deals with a barrage of anti-trust investigations from dozens of Attorneys General, the FTC and the Justice Department.

Sundar replaced company co-founder Larry Page as CEO of the entire company, Alphabet, on December 3, 2019. At the same time both Larry and co-founder Sergey Brin announced they were retreating from day-to-day work at the company. The co-founders are still the majority owners and super-owners through dual-class shares. They also still remain on the company's Board.

Before being named CEO of Google, Pichai worked at Google for 11 years as product chief. In that position, Pichai led the development of such software products as Google Chrome, Google Drive, and Google Maps.

Between 2015 and 2020 alone, Sundar received north of $1 billion in total compensation and potential earnings, pre-tax.

Sundar Pichai's base salary is $2 million, though in a recent typical year he has earned north of $100 million when bonuses and stock grants are taken into account. For example, he earned $100 million in 2015 and $199 million in 2016. When he earns these large salaries, it's mostly made up of share grants. In 2017 he "only" made $1.3 million because he was not given a major grant. In 2018 his total compensation was $470 million.

In April 2013 Sundar was granted 353,939 restricted shares of Alphabet stock that had a 5-year vesting period. When those shares fully vested in April 2018, they had a paper value of $380 million. They had been worth as much as $450 million when the stock was trading at nearly $1300 per share. At the time he was awarded the grant, the shares were worth $184 million. In addition to his 2013 stock grant, Sundar has earned north of $100 million in total compensation every year from 2014 onward. As we mentioned previously, he earned $199 million in 2016.

On December 20, 2019, it was announced that Sundar would receive an additional grant of $240 million in stock options over three years. Furthermore his base salary was raised to $2 million up from $650 thousand.

Sundar Pichai was born on June 10, 1972 in Madurai, Tamil Nadu, India to stenographer Lakshmi and GEC electrical engineer Regunatha. As a youth, he went to Jawahar Vidyalaya Senior Secondary School. Pichai went on to attend the Indian Institute of Technology Madras, and then the Indian Institute of Technology Kharagpur. From the latter school, he received a degree in metallurgical engineering.

Emigrating from India to the United States, Pichai enrolled at Stanford University in Palo Alto, California. There, he earned his MS in materials science and engineering. Pichai went on to attend the Wharton School of the University of Pennsylvania, from which he graduated with his MBA.

Starting his career as a materials engineer, Pichai did engineering and product management at the Silicon Valley corporation Applied Materials. Following that, he worked in management consulting at the firm McKinsey & Company.

In 2004, Pichai joined Google. For the company, Pichai led the development of numerous major software products, such as Google Chrome, Google Drive, Chrome OS, and Android. He also oversaw the development of applications including Google Maps and Gmail. In 2010, Pichai introduced a new audiovisual media format called WebM.

In the summer of 2015, Pichai was chosen as the new CEO of Google. He officially took over the position that October following the creation of Alphabet, Google's new holding company. In late 2019, Pichai also became the CEO of Alphabet. 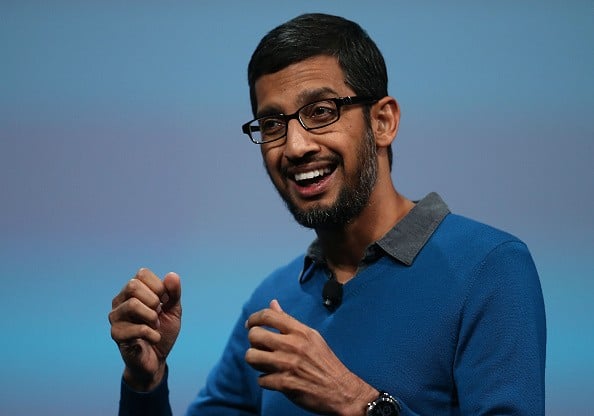 During his tenure as CEO of Google, Pichai has attracted controversy for a variety of reasons. First, in 2017, he was publicly questioned for firing an employee who denounced Google's diversity policies in a ten-page manifesto. In December of the following year, Pichai faced greater controversy when he was questioned by the United States House Judiciary Committee on a myriad of issues related to Google. Specifically, he was asked to give testimony relating to the company's privacy practices and potential political bias on its platforms. In response to the privacy issue, Pichai asserted that Google users may elect to opt out of having their data collected.

In July 2020, Sundar, Jeff Bezos, Mark Zuckerberg and Tim Cook were called to testify before the United States House of Representatives Subcommittee on Antitrust. Sundar fielded the very first question of the day. That question, asked by Representative David Cicilline:

In late 2020, Pichai and the CEOs of Twitter and Facebook were subpoenaed by the United States Senate Committee on Commerce, Science, and Transportation. They were asked to testify before the Committee in relation to concerns over the tech industry's exemption from Section 230 of the Communications Decency Act of 1934.

Pichai has been the recipient of some significant honors. In both 2016 and 2020, he was named on Time's list of the world's 100 most influential people. Among his other accolades, Pichai was bestowed with the Padma Bhushan in 2022; granted by the Government of India, the honor is the third-highest civilian award in the country.

With his wife Anjali, Pichai has two children. In his free time, he likes to play cricket and football. 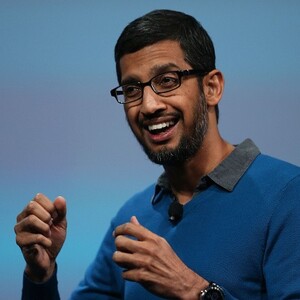