What was Steve Jobs' net worth and Salary?

Steve Jobs was an American inventor and business magnate who had a net worth of $10.2 billion at the time of his death in 2011. Steve Jobs was known for being the co-founder and chief executive officer of the technology giant, Apple Inc. Jobs also served as the chief executive of Pixar Animation Studios which he helped sell to Disney.

Jobs was worth over $1 million in 1978 when he was just 23 years old, two years before the company went public. After Apple went public in December 1980, he was worth $250 million.

Despite what you might assume, at the time of his death in 2011 the majority of Steve Jobs' net worth did not come from Apple stock. It came from Disney stock.

Back in 1985, Steve resigned from Apple after an explosive boardroom war. Within days he sold 99.999% of what had been a 20% stake in the company, netting around $100 million. He reportedly kept a single share so he could continue receiving annual reports and attend shareholder meetings if he had the desire.

Steve returned to Apple in 1996 after his company NeXT was acquired. A year later he was named CEO again. As part of this process the Apple board coaxed Steve back to the job with an extremely generous stock options package. He ultimately grew to own 5.5 million shares of Apple. When the stock split 7-1 in 2014 (three years after his death), that stake became 38.5 million shares. When the stock split 4-1 in August 2020, that stake became 154 million shares. As of this writing, 154 million shares are worth $20 billion. Every year those shares produce around $160 million in dividends for Steve's widow Laurene Powell Jobs.

Had Steve never sold his 20% stake in Apple, today those shares alone would be worth $400 billion.

Steve's widow Laurene Powell Jobs inherited both stakes, along with the rest of the couple's assets. Today she is worth $30 billion. She is one of the 20 richest people in America. 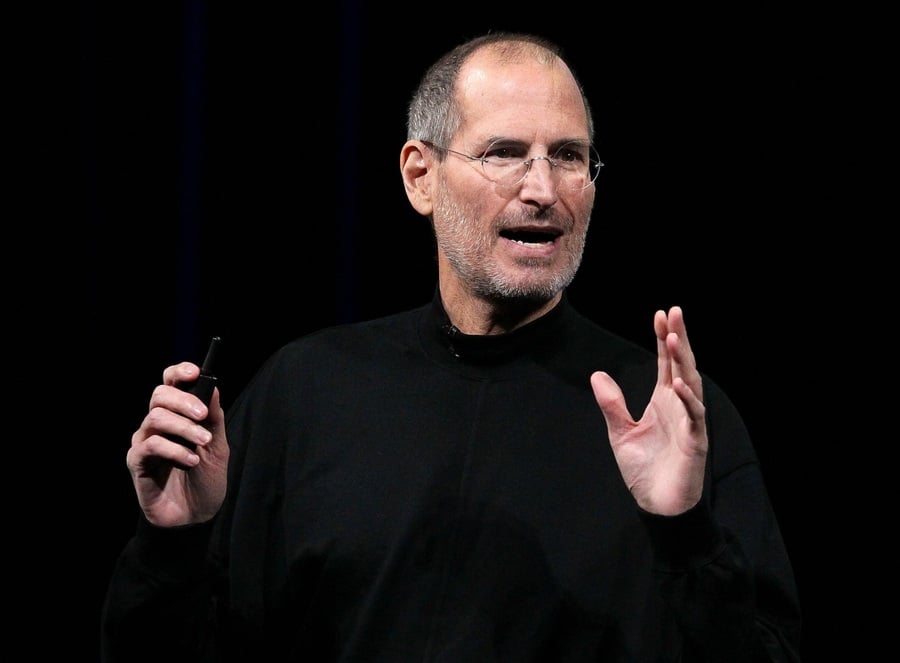 Steven Paul Jobs was born on February 24, 1955, in San Francisco, California. His biological parents were Abdulfattah Jandali and Joanne Schieble. He was adopted by Paul and Clara Jobs. His adoptive father, Paul Reinhold Jobs was a Coast Guard Mechanic who married Clara Hagopian in 1946 after he left the Coast Guard. Clara grew up in San Francisco as the daughter of Armenian immigrants. After the Coast Guard, Paul was a "repo man," who repaired cars. Clara had an ectopic pregnancy, which led the couple to consider adoption. Paul and Clara adopted Steve's sister Patricia in 1957. In 1959, the family moved to Mountain View, California. Paul built a workbench in the garage to pass his love of mechanics along to his son. By the time he was 10, Jobs was very into engineering and befriended many of the engineers who lived in his neighborhood.

Jobs had problems functioning in a traditional classroom. He resisted authority figures, misbehaved frequently, and was suspended a number of times. He had difficulty making friends with children his own age. He was an excellent student and skipped the fifth grade. He transferred to Crittenden Middle School in Mountain View for 6th grade. Jobs reported being bullied often in middle school and called himself a loner during this time in his life. By the middle of seventh grade, he was tired of the abuse at school and gave his parents an ultimatum — he wanted to switch schools or he'd drop out. The Jobs family was not particularly well off, but they took all of their savings to buy a new house so that Steve could change schools in 1967.

The new Jobs family home was in the much better Cupertino School District. In 1968, when Jobs was 13, Bill Hewlett of Hewlett-Packard hired him for a summer job after Steve had the balls to cold-call him to ask for parts for an electronics project he was working on.  Jobs started high school at Homestead High in 1968. He met Bill Fernandez who introduced him to Steve Wozniak. During high school Jobs was interested in electronics and literature. His senior year his two best friends were Wozniak and his girlfriend, Chrisann Brennan who was a junior.

Wozniak enrolled at nearby University of California, Berkeley and Jobs visited him several times a week in 1971. That was Jobs's senior year in high school and he was taking college freshman level English classes at Stanford. At about this time, Woz designed what he called a "blue box," an inexpensive digital device that made sounds that could manipulate the phone network to allow the user to make free long-distance calls. Jobs decided to market and sell them and split the profits with Wozniak. This led to Jobs concluding that a career in electronics could be not just profitable, but also fun.

In September 1972, Jobs enrolled at Reed College in Portland, Oregon. It was the only school he applied to, despite its high cost. Jobs dropped out of Reed after one semester without telling his parents. He didn't want to spend his parents' money on an education that seemed meaningless to him. Jobs audited classes and slept on the floors of his friends' dorm rooms, recycled Coke bottles for money for food, and went to the local Hare Krishna temple for free meals.

Jobs returned to his parents' house in Los Altos in February 1974 and started looking for a job. He was hired by Atari, Inc. as a technician in their Los Gatos, California office. Atari's co-founder Nolan Bushnell later described him as "difficult but valuable", pointing out that "he was very often the smartest guy in the room, and he would let people know that."

By March 1976, Wozniak completed the basic design of the Apple I computer and showed it to Jobs, who suggested that they sell it. It was Jobs who suggested the name after returning from a fruit farm where he had subsisted on nothing but apples for more than 10 days straight. In his eyes, the name "Apple" was "fun, spirited and not intimidating," perfect for a piece of unfamiliar technology. It was also Jobs who suggested that Wozniak manufacture his Apple 1 as a commercial product that other computer enthusiasts could purchase–Wozniak was planning to just give everything away for free. On April 1, 1976, Jobs, Wozniak, and administrative overseer Ronald Wayne founded Apple Computer Company (now called Apple Inc.) in Jobs's parents' home on April 1, 1976. The operation originally started in Jobs's bedroom and later moved to the garage. Wayne stayed only a short time, leaving Jobs and Wozniak as the active primary cofounders of the company. Later that year, computer retailer Paul Terrell purchased 50 fully assembled units of the Apple I from them for $500 each. Eventually about 200 Apple I computers were produced in total. The Apple 1 was an instant smash hit that opened the door for the Apple II which was an even bigger success. In 1976, Apple's revenues were $175,000. In 1977 revenues grew to $2.7 million. Apple went public in 1980 after doing $117 million in sales. The public offering made over 300 employees at Apple instant millionaires.

On January 22, 1984, Apple aired a Super Bowl television commercial titled "1984," which ended with the words: "On January 24th, Apple Computer will introduce Macintosh. And you'll see why 1984 won't be like 1984." On January 24, 1984, an emotional Jobs introduced the Macintosh to a wildly enthusiastic audience at Apple's annual shareholders' meeting. The Macintosh was widely acclaimed by the media with strong initial sales supporting it. However, the computer's slow processing speed and limited range of available software led to a rapid sales decline in the second half of 1984.

In 1985, Jobs was forced out of Apple, when sales of his much-ballyhooed Macintosh computer failed to live up to the hype. Jobs spent the next several years developing the computer company, NeXT (which Apple would eventually need to buy for its operating system) and Pixar Animation Studio. NeXT was acquired by Apple in 1997 for $427 million, which brought Jobs back to Apple. We all know what happened next. Apple was on the brink of complete failure when Jobs introduced the iMac and began the resurgence that would make him a billionaire many times over and give the world the iPod, iTunes, iPhone, iPad, AppleWatch, AppleTV, etc.

Jobs also made a pretty penny from Pixar, too. He bought the fledgling animation studio from George Lucas in 1986 and became its CEO and its biggest shareholder. The studio gained acclaim for its 1995 hit, Toy Story. Disney bought Pixar in an all-stock, $7.4 billion transaction in 2006.

Resignation from Apple and Death

On August 24th, 2011 Jobs resigned from Apple unexpectedly, with most people believing it was for health reasons. Unfortunately, Steve Jobs died of pancreatic cancer on October 5, 2011. He was replaced by long-time Apple employee and former Apple COO, Tim Cook. 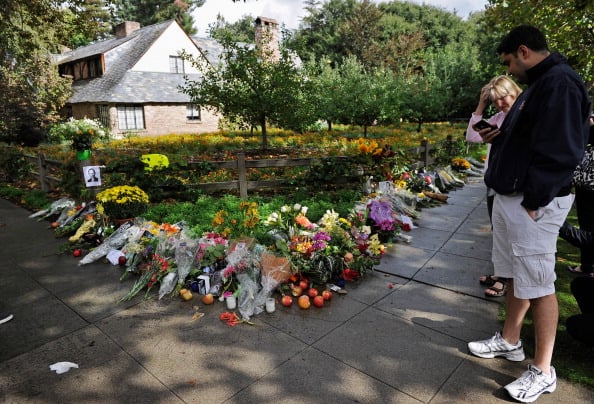 Jobs married Laurene Powell in 1991. They met while she was a graduate student at Stanford University. He was giving a guest lecture.

Powell is a businesswoman who founded the Emerson Collective, advocating for a number of causes. Jobs had four children including writer Lisa Brennan-Jobs whose mother was painter and author (and Jobs' high school girlfriend) Chrisann Brennan. Steve's sister Mona Simpson is an award-winning novelist.

In 2015 Jobs was portrayed by Michael Fassbender in the biopic Steve Jobs. He was also played by Ashton Kutcher in the film Jobs in 2013.

Where did Steve Jobs live?

In 1984 Steve purchased a 17,000 square foot, 14-room home in Woodside, California known as the Jackling House. The original home was built in 1925 for copper baron Daniel Cowan Jackling. The home was designed by noted California architect George Washington Smith.

Steve lived in this home at what was arguably the lowest point of his business career, when he departed Apple. He also lived here during some happy times, including in 1991 when he began dating future wife Laurene. Steve and Laurene's were living here when they welcomed their first child.

For whatever reason, Steve hated the house. He wanted nothing more than to demolish it and build something from scratch. He first submitted demolition permits to the town of Woodside in 2001. As the town was debating the plans Steve purposely left the home unoccupied and falling into disarray over the next several years. In 2004, the town of Woodside approved his demolition plans. This announcement set off a firestorm among local neighbors and preservationists that resulted in a years-long legal battle. The lawsuit went all the way up to the Supreme Court of California. The Supreme Court confirmed a lower court's rejection of Jobs' plans. In March 2010 Jobs finally received permission to demolish the home. Demolition happened in February 2011. Jobs died just eight months after the home was finally razed. Steve's widow Laurene still owns the property to this day and has been busy over the last decade building a new impressive estate.

In 1991, newlyweds Steve and Laurene bought a 1930s Tudor-style home in Palo Alto, California that would be the place they continued to live for the rest of his life. Steve actually died in this home. 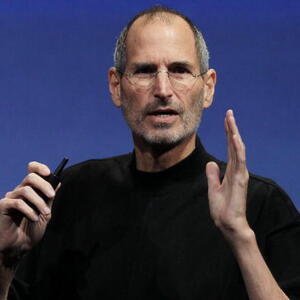