Marchionne achieved notability that few businessmen are able to by actually doing a tangibly good job in turning around, not one but TWO struggling car companies: The aforementioned Fiat and Chrysler were both in serious financial trouble before Marchionne was brought in to turn them around and get them back on their feet, which he managed to do in both cases. He also successfully launched the Ferrari brand as a highly successful publicly traded company. One of the ways he was able to do this is through a unique and idiosyncratic management style based on his preference for a "hands on" style of communication. For instance, Marchionne is reported to have been appalled by the practice at Fiat of executives communicating with each other through their secretaries. Marchionne favors a much more personal approach, and even moved his office from the top floor penthouse to the fourth floor of Chrysler headquarters, the same floor of the engineering department. The penthouse at the top floor which used to be the offices of the president and vice president of the company now sits empty and unused, relics of an era of poor business.

Salary and Compensation: In a typical year, Sergio was paid a base salary of $11 million. That number could grow significantly with bonuses. For example, in 2014 Sergio earned a total of $72 million after overseeing a 61% increase in Chrysler's share price. In the previous year he earned around $30 million. Over the years he was also awarded stock grants that eventually totaled around 1% of Fiat by the time he died.

In July 2018, Sergio suddenly stepped down from his position due to health issues. Unfortunately he died on July 25, 2018 at the age of 66. 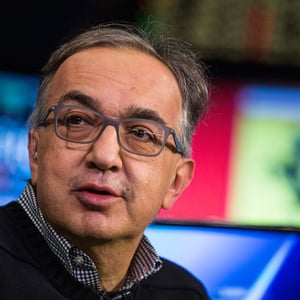