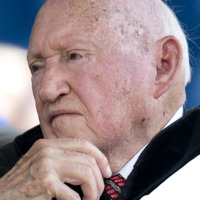 Samuel Truett Cathy net worth: Samuel Truett Cathy was an American entrepreneur who had a net worth of $6.6 billion. Samuel Truett Cathy earned his fortune as the sole founder of Atlanta-based restaurant Chick-fil-A. After serving in World War II, Cathy opened his first chain of restaurants called Dwarf Gill (now known as Dwarf House) in 1946. In 1967, twenty-one years after launching Dwarf House, Cathy launched his second fast-food restaurant, Chick-fil-A in his hometown Atlanta. Today the restaurant, which is known for its chicken entrees, has over 1800 locations and annual sales of $5 billion. In 2008, Cathy launched another fast-food restaurant called Upscale Pizza in Fayetteville, Georgia.

A deeply religious man, Cathy extends his belief to his business. To this day, all of his restaurants are closed on Sundays. Outside of fast food, Cathy published several successful books. His books include the autobiography "Eat Mor Chikin" and a motivational book called "How Did You Do It, Truett?: A Recipe for Success". The father of three also composed a parenting book called "It's Easier to Build Boys Than to Mend Men".

Cathy also devoted his time to the needs of children from underprivileged backgrounds. He set up the WinShape foundation in 1984. To date, Cathy's foundation has contributed tens of million of dollars to foster homes and summer camps. The WinShape Foundation also made generous donations towards college schlarships and marriage counselling programs. Cathy, who has fostered four children, also established WinShape Homes in 1987. Today, WinShape Homes, a long-care foster home program, has 14 foster homes across Alabama, Georgia, and Tennessee. The World War II Veteran has taken in over 200 children through the foster care program. Cathy's undivided kindness does not end with generous donations, it is known that he welcomes homeless children into his home and has frequently taught in Sunday schools.

On September 8, Chick-Fil-A confirmed that S. Truett Cathy had died at the age of 93 at his home in Clayton County, Georgia.